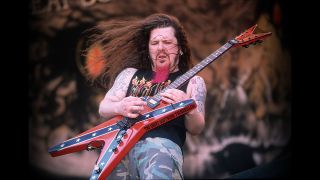 A Florida metal band have appealed for calm after being confused with the outfit involved in the desecration of Pantera icon Dimebag Darrell Abbot’s grave.

Fans erupted with fury last month after an outfit called Nuclear Hellfrost claimed responsibility for vandalising the Texas memorial to the guitarist, who was shot dead on stage in 2004. A statement from Pantera spoke of their “absolute disgust.”

Nuclear Hellfrost member Reece Eber later accepted sole responsibility and admitted: “I owe everyone an apology for my actions because they were uncalled for, were horrible and despicable.”

Now a band named Hellfrost say they’re being misidentified as Nuclear Hellfrost – and that they’ve been receiving death threats ever since the grave desecration was revealed.

Mainman Sinjin Wheatley says: “Lately we have been receiving a lot of hate mail because people have been confusing us with Nuclear Hellfrost. We just want to clarify that we are not associated with them or the recent vandalism to Dimebag’s grave.”

Earlier this month Nuclear Hellfrost tried to end their association with the drama, saying: “If you have problems direct them to the appropriate person, and not to us or the other members that weren’t involved.”