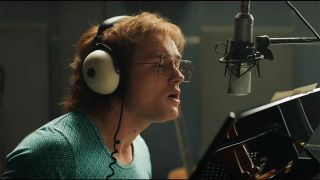 An aircraft passenger has accused Delta Air Lines of removing the majority of gay references from the hit Elton John biopic Rocketman.

Entertainment Weekly’s digital director Shana Krochmal says she was onboard a flight on Wednesday when she noticed that several scenes had been cut and later voiced her anger on Twitter.

Krochmal said: “On Delta today, I discovered that Rocketman is stripped of almost every gay reference or scene that Elton John fought to keep in the film’s mainstream release – including a simple chaste kiss.

“What does it say that the edit left in a scene of John Reid assaulting Elton but removed any evidence of intimacy between them or for that matter Elton and any man? What is that saying is OK?

“I am about 99% sure I saw a fully uncensored R-rated version on Air Canada earlier this year, by the way, which was also the norm for R-rated films on Virgin America.

“And, given how many passengers watch whatever they want on tablets or phones often in full view of other travellers, this seems especially egregious.”

A Delta spokesperson has since responded in a statement to PinkNews saying: “Delta’s content parameters do not in any way ask for the removal of homosexual content from the film.

“We value diversity and inclusion as core to our culture and our mission and will review our processes to ensure edited video content doesn’t conflict with these values.”

According to The Advocate, Delta told them in 2017 that they don’t edit in-flight entertainment and instead show versions of films that have been offered by the film studios.

Rocketman, which stars Taron Egerton in the lead role, carries a 15 certificate in the UK, with Elton previously reporting that he resisted moves from studios who wanted to cut some of the sex and drug scenes to allow a younger audience to experience the film.

Elton told The Guardian: “Some studios wanted to tone down the sex and drugs so the film would get a PG-13 rating. But I just haven’t led a PG-13 rated life.

“I didn’t want a film packed with drugs and sex, but equally, everyone knows I had quite a lot of both during the 70s and 80s, so there didn’t seem to be much point in making a movie that implied that after every gig, I’d quietly gone back to my hotel room with only a glass of warm milk and the Gideon’s Bible for company.”

Here's everything you need to know about Rocketman, while Classic Rock have also compiled the ultimate Elton John playlist.

Rocketman Soundtrack
The soundtrack to the Elton John biopic features tracks sung by the film's leading actor Taron Egerton, along with the new song (I’m Gonna) Love Me Again.View Deal