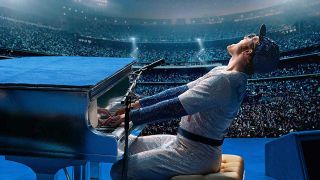 There's a framing device at the heart of Rocketman that allows the Pinner prodigy's story to be told in warts n' all detail. As we meet the former Reginald Dwight, he's on his way to begin his first rehab meeting, dressed in an extravagant, phoenix-like costume which - as we discover at the end of the film - he's acquired for an unfulfilled engagement at New York's Madison Square Garden.

At the meeting, he admits his problems: he's gay, a sex addict, an alcoholic, and a cocaine hound. Bang. Two minutes in, and the audience already knows what's about to follow. It's Elton John, it's confession time, and anyone expecting a straightforward biopic is going to be disappointed by a film that is anything but straightforward. In short, it's two hours of Elton John looking miserable, interrupted by a brief period where he marries a woman who looks like his mother. With music.

Like Mama Mia, the songs in Rocketman are employed to move the plot from one scene to the next. They fit the story surprisingly well, with none of the desperate shoe-horning normally associated with jukebox musicals. However, any real life chronology is gleefully ignored, and often they become part of the story years before they were written in real life: John's duet with Kiki Dee, Don't Go Breaking My Heart, was released at least half a decade after its depiction in the movie. And sometimes they move time itself: In one scene - a frantic, brilliantly staged set-piece built around Saturday Night's Alright (For Fighting), - John ages several years between the song's casual beginning and it's climactic finale.

It's a film that clearly doesn't care about accuracy. The closing credits state that John and songwriting partner Bernie Taupin have been together for 50 years and have "never had an argument," a revelation that arrives 15 minutes after a scene in which they're depicted doing just that.

So far, so fucked-up. But then this is a film about fuck-ups. Elton is fucked-up. His mother is fucked-up (famously, she once hired an Elton John impersonator for own her birthday party because she wasn't on speaking terms with her son). His father is a repressed fuck-up.

Only Taupin, who seems relatively unaffected by the unfolding chaos, and ruthless manager John Reid - fresh from being portrayed by another actor in Bohemian Rhapsody - seem to hold things together. But mostly it's Elton being fucked-up. He cries a lot. He drinks too much. He does too much coke. He tries to drown himself at his own pool party. And he wonders why no one loves him.

Ignoring the obvious answer - that in real life, no one prefers drunks to non-drunks - the rehab meetings allow John to go over his past to figure out why everything going so right felt so wrong. Despite the success, and the adoration, and the millions of sales, and the country pile, there's not a moment where he seems genuinely happy, until he gradually makes peace with himself, sheds the phoenix costume in favour of a snappy track suit, and lives happily ever after.

Taron Egerton does a tremendous job in the main role, capturing Elton John's vocal mannerisms if not his precise sound, while Richard Madden smoulders throughout as Reid. And director Dexter Fletcher's decision to dispense with reality does have its upside. Otherwise we wouldn't have the scene in which Elton duets with his boyhood self at the bottom of a swimming pool, bubbles escaping his nostrils as he does, or another in which the audience at an early US show literally levitate. It's The Dirt as envisioned by Baz Luhrmann.

Despite these visual riches, doubts remain. You never really feel like Egerton gets to grips with Elton's soul, however accurate the surface impersonation. You never really understand the roots of his loneliness beyond a very superficial level. It's 30 minutes too long, and at the same time the songs are truncated, as if the director is terrified of the audience becoming restless.

In the end, it's the treatment of those songs that's the movie's one true crime. Not only is there no attempt to explore or explain the appeal of Elton John's remarkable music, but it's rendered mediocre by unfamiliar arrangements and by the director's unwillingness to let the songs stretch. You're left with a movie about a musician where the entertainment is provided by his misery rather than by his music, and that's self-defeating, self-pitying and self-indulgent.