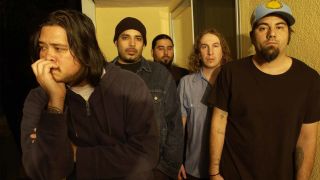 Chino Moreno says Deftones reconnected as friends during the studio sessions for lost album Eros – the record they scrapped following the car crash that claimed the life of bassist Chi Cheng.

The singer recalls the “dark days” of when they’d recorded 2003’s self-titled work and 2006’s Saturday Night Wrist – a time steeped in “excess”, “relationship issues” and drug use which almost drove the band apart. But Moreno says they began to rekindle their friendships while writing the ill-fated follow-up.

He tells Matt Pinfield: “We were getting along so well during the Eros sessions. It’s like the music actually was even taking a backseat to our friendships. We’d go into the studio, and we were way into playing the board game Risk at the time, so we’d set up this elaborate game of Risk that would last for weeks at a time.

“Terry Date was producing that record and he’d come in and be like, ‘C’mon guys let’s get to work’ and we’d be like, ‘One more gam.’ We were having so much fun together as friends and reconnecting – then during those sessions is when Chi had his accident.”

Moreno continues: “It was like we had been through all this and were just on the brink of doing something great with all these great vibes around it – and then that happened. We were just broken at that point.

“There was not really any thought to whether we were going to continue as a band. We just pretty much figured that’s it. We took a good six months to a year where music wasn’t even spoken about.”

Moreno says they eventually met up at their Sacramento studio where to find that all their gear was set up in a circle exactly where they’d left it, including Cheng’s bass guitar.

Moreno adds: “We probably spent an hour or two just sitting there talking about Chi and telling stories from our first days meeting him to where we were at that moment.

“At that point, instead of taking the conversation over to, ‘So what do you want to do now?’ Everyone just walked over to their gear and just started playing. From that moment we started writing what became Diamond Eyes.”

Deftones are currently touring in support of their latest album Gore.

Every Deftones album ranked from worst to best