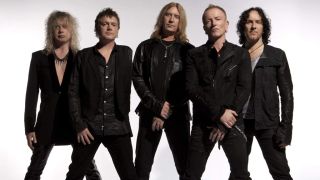 Vivian Campbell reveals that he and his Def Leppard bandmates all have a lead vocal on their upcoming album.

He’s been recovering from stem-cell treatment to combat his Hodgkin’s lymphoma and laid down tracks for the follow-up to 2008’s Songs From The Sparkle Lounge with his Leppard bandmates over two sessions.

He tells The Province: “The first thing we did was go into the studio and set up live. I know a lot of bands do it, but we haven’t done it since 1996.

“With this album there wasn’t as much talking but there’s an awful lot of experimentalism that goes on with a Leppard record. Once we find our direction we’re very quick.”

Campbell was absent for the second of the three sessions as he underwent cancer treatment. When he returned, he says the band were ready to record – and everyone had a lead vocal.

He continues: “We’ve never done that before. It’s diverse but it all sounds like Def Leppard. It’s the best album we’ve made in 23 years.”

The group have previously staged a Las Vegas residency and released Acoustic Medley in 2012 and Campbell says their ability to mix styles has been a benefit.

He adds: “If the band had continued to be a hard rock band it would have been successful. But we’ve been able to progress and still been true to our hard rock roots. We’re one part AC/DC and one part Queen.

“Frankly, we could go year after year playing our hits. A record for us is kind of a loss leader. A new record is something we do for us.”

Leppard will team up with Whitesnake and Black Star Riders for a 10-date UK and Ireland tour in December.

Meanwhile, Rock Candy Records have reissued an album by Campbell’s band Riverdogs. Their self-titled 1990 debut is out now as a Special Deluxe Collector’s 2CD Edition featuring bonus tracks and a 16-page booklet.