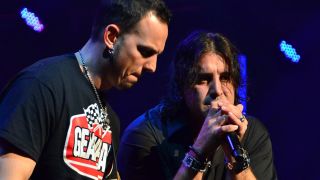 The singer this week released an emotional video in which he claimed to be living in his truck after his bank account had been frozen, and said he was “under attack.” His comments were made after his wife Jaclyn filed for divorce citing his heavy drug use, violent episodes and even a suicide attempt.

Tremonti reveals he’s been inundated with social media requests from Creed fans, and confirms he’s seen Stapp’s video. The guitarist says via Facebook: “I know everyone is very worried about Scott – I am as well. I tried reaching out but didn’t have any success. I will keep trying, but I think it would be best to keep such personal matters off social media.”

Earlier this month Tremonti told TeamRock he hadn’t spoken to Stapp since Creed’s 2012 comeback tour and added that the band was the “furthest thing” from his mind.