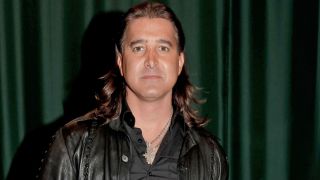 Creed singer Scott Stapp's wife has cited his heavy drugs use and attempted suicide in her divorce papers.

She says he was held in a psychiatric ward after after trying to take his own life earlier this year. She alleges his latest drugs lapse is his seventh since their wedding, and included an episode in a hotel room where he “became hostile and physical and proceeded to demolish the room” in the presence of her and their teenage son.

Her paperwork includes a series of threatening text messages he’s said to have sent after disappearing from their Florida home in October. She recently applied to have him forced into rehab – subject to a court hearing, he could be ordered to undergo treatment for up to five months.

Stapp yesterday posted a self-shot video on Creed’s Facebook page, claiming he’d been living in his truck, had his bank accounts frozen and needed a lawyer to help him fight “slanderous, libellous accusations.”

In her divorce petition Jaclyn requests full custody of the couple’s three children, claiming: “His behavior is an increasingly detriment to their well-being.”

“Florida is not safe. Biological weapons on the way. U have to leave with kids and meet me in Atlanta.”

“I’m coming to get you Satan and children. No mercy. You know how this ends. God created you and now God is ending you.”

“Wells Fargo working out my account problems. I’m out of gas. Haven’t eaten all day. I’m asking if they can spot me $1,000 so I don’t fall over from malnutrition.”

“I wouldn’t doubt it if the CIA is behind Alcoholics Anonymous.”

Jaclyn’s attorney Jason Brodie says: “This is a very painful and personal matter for Jaclyn and her family. Her primary concern remains, as it always has been, the best interest of her children.”

Stapp cancelled the November dates of his US solo tour last month, saying: “I began to cut some corners in my recovery. There are some health priorities I need to address so I can be the best husband and father I can be.”