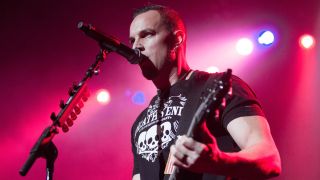 Mark Tremonti says Creed is the furthest thing from his mind as he continues work on the second Tremonti album.

The guitarist is laying down vocals on what will be his self-titled project’s follow-up to 2012’s All I Was. He fronts the band that includes Wolfgang Van Halen on bass, drummer Garrett Whitlock and second guitarist Eric Friedman, who has also worked with Creed.

As well as his solo work, Tremonti has his hands full with Alter Bridge – which includes Creed drummer Scott ‘Flip’ Phillips and Creed bassist Brian Marshall.

And according to Tremonti, he and the various Creed alumni he regularly works with haven’t spoken to frontman Scott Stapp since their 2012 comeback tour. An album was said to be in the works at the time, but never materialised.

He says: “We haven’t spoken with Scott since the last tour years ago. Me, Flip and Brian haven’t talked about doing it, we’re just content with doing Alter Bridge and we’re busy as hell doing the Tremonti stuff.

“I’ve got a full plate at the moment and I’m perfectly happy with where I’m at. There’s no plans right now.”

Tremonti recently described Wolfgang Van Halen as the “best of the best” as a bass guitarist and said fans would notice a big difference in the tightness of the rhythm section on the second Tremonti record.

Meanwhile, Stapp has been out on tour in support of his own solo album Proof Of Life. Earlier this year, he spoke candidly about the brush with death that led him to get clean and sober.