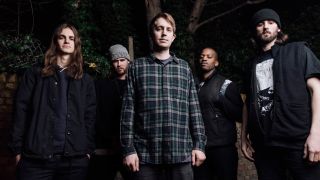 Counting Days have hired former Bring Me The Horizon guitarist Curtis Ward on a full-time basis.

He replaced Bobby Daniels for the group’s recent run of shows with Hacktivist and Crossfaith. He’ll take part in Counting Days’ newly-announced support slots with Architects at two album launch shows in Brighton next month.

Ward says: “The band mixes my favourite parts of metal and hardcore and uses them to create an awesome sound. I’ve been trying to make own band for a while now and have been struggling to find people who can commit the time.

“So when guitarist Charlie Wilson asked me if I’d like to try out for Counting Days, I jumped at the chance. The songs are real fun to play – plus we’ve been writing new songs together already.”

Wilson reports: “I’ve been friends with Curtis for a while – we met through mutual friends at hardcore shows around the time he moved to London.

“His style of playing and taste in music was perfect for Counting Days. We’re really stoked on bringing him into the band. We feel he’ll be a great addition to our live performances and the writing process.”

The band released their debut album Liberated Sounds last year after they signed a deal with Mascot Label Group. Counting Days have a handful of other appearances planned over the coming months, including a set at the Download festival in June.