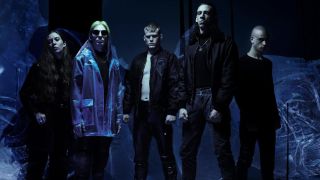 Back in mid-March, just as the music industry was beginning to slow down due to the coronavirus pandemic, Code Orange decided to press ahead with a launch show in support of their new album Underneath.

The band, who had been planning the concert for months, played a set at the Roxian Theatre in their home town of Pittsburgh – and although fans weren’t able to attend, Code Orange live-streamed the evening on their Twitch channel.

Now the band have decided to do something similar on July 30, when they’ll play an Under The Skin set at Pittsburgh’s Theatre Factory.

The performance will see Code Orange revisit many tracks from their back catalogue, stripping them down and reimagining them in an MTV Unplugged style. Once again, they’ll broadcast the show live on Twitch.

On the night, the band will also be offering fans the chance to purchase exclusive merch along with a new limited edition vinyl pressing of Underneath.

After their lockdown show in March, Code Orange said: “Not bad for a first gig huh? Just like you all, we will not go out quietly. Thank you for the support and the most positivity we’ve ever received. Hopefully this can help open up some doors for the music world right now.

“As for us, this is day one. A new era has just begun. See you very soon.”

In Metal Hammer review of Underneath, we gave in 10/10 and called it "the greatest metal record in a generation."

Code Orange: Underneath
Code Orange are back with their fourth studio album Underneath. The follow-up to 2017's Forever features the singles Swallowing The Rabbit Whole and Sulfur Surrounding.View Deal