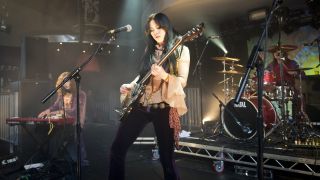 Purson, fresh from their Classic Rock Roll of Honour nomination for Best New Band, are to play the infamous Viper Room in Los Angeles on November 5, the day after the award winners are announced.

The band, whose new EP The Meantime comes out on November 3, will be making their US debut on the night. Support comes from Classic Rock DJ’s Ian Camfield (Xfm) and Kyle Olsson (TeamRock Radio).

The band’s debut album The Circle And The Blue Door has been described as being like “an eerie, long-abandoned funfair whirring back to life… all spun around Rosalie Cunningham’s sternly alluring, Siouxsie Sioux-tinged vocals”.