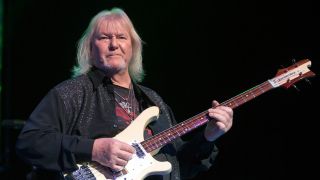 Late Yes bassist Chris Squire will be remembered at this year’s Progressive Music Awards – as the Virtuoso Award has been renamed the Chris Squire Virtuoso award.

He passed away in June after a short battle with cancer, and he’s since been acclaimed by artists from across the music world.

The renamed Virtuoso Award, sponsored by Carlin Music, seeks to highlight the very best instrumentalists. It’s not disputed that Squire influenced many of them.

Yes drummer Alan White says: “Renaming the award is highly appropriate. Chris did so much to share the way the bass is played these days. His impact was incalculable.

“All of us who were privileged to know him will miss him hugely. But the music he did so much to help create is timeless – and this honour will ensure his name will never be forgotten.”

Keyboardist Geoff Downes adds: “It’s really nice that Prog have done that. We all want Chris to be remembered in the best possible way, and naming an award after him is a great honour, not just for Chris but for the band as well.

“I think it’s very fitting. As a pioneer of bass guitar, there’s probably no one who could match him on what he achieved with the instrument. He really had a big influence, not just on the rock scene but all other types of music. There are bass players out there that remember Chris Squire as being the godfather of rock bass guitar.”

Prog editor Jerry Ewing says: “Never has the progressive world mourned a loss so heavily. A giant in all senses of the word, and a man whose presence touched all who came into contact with him, and who was great fun to boot.

“Renaming the Chris Squire Virtuoso Award is to help make sure his name, and his dedication to forward-thinking music, lives on.”

Orange Amplification Presents the Progressive Music Awards in association with currencies.co.uk on September 3 at the Underglobe in Shakespeare’s Globe Theatre in London.