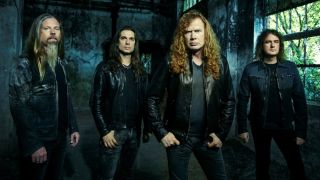 Drummer Chris Adler will tour North America as part of Megadeth in the spring, it’s been confirmed.

He appeared on the band’s 11th album Dystopia as a guest member, and was later invited to join full-time. But he refused, saying: “I love being there, but that’s not where home is.”

He played on the band’s European dates in November, pulling double duties as Lamb Of God performed on the same bill.

His publicist tells Metal Injection: “Earlier this week Megadeth announced North American dates, heading out with Suicidal Tendencies, Children Of Bodom and Havok. Chris Adler will be behind the kit for the entire run.”

The stint begins in Dallas on February 20 and ends on March 24 in Quebec City. Dystopia is released on January 22.