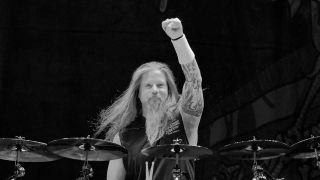 In July this year, Lamb Of God officially announced that drummer Chris Adler was out of the band.

He had been missing from the group’s live lineup for some time prior to his departure, with his absence thought to be due to injuries he sustained in a motorcycle accident in 2017.

Now Adler has broken his silence – and while acknowledging that the crash did have an effect on his health, he reports he's “been well since August of 2018.”

Adler says: “I feel it is time to address the many questions being asked about my departure from Lamb Of God.

“Allow me to start with a relative concept of understanding. We all gave our lives to this – 26 years is not flippant. Each one of us sacrificed and lost much on a personal level to live the dream we had when we were kids.

“I will always love each member of the band for believing in me and agreeing to take on the world. We managed to find some love in the machine, but in turn it took things that cannot be recovered.

“I did not leave the dream. I did not make the decision to leave my life’s work. The truth is that I am unwilling to paint by numbers. I wish my brothers all the best in their continued ventures. I can assure you that you will hear from me again. I was given a gift and hope to continue to share it.”

He continues: “Many have asked about a motorbike accident I had in Thailand in 2017. It’s true that it was not pretty, but I’ve been well since August of 2018. Thank you for your concerns.

“I support my friends and the dream I allowed them to share in. I loved and am still humbled by every second of the smiles and horns we elicited. There is an ambiguous concept in our world of ‘selling out.’

“I cannot define that outside of my personal understanding, but know that being trapped in a ‘creative’ formula and/or playing the same song 10,000 times did not bolster my love of playing.

“I’ve never been one to ‘phone it in.’ I’d rather mow the grass. I acknowledge and am truly grateful of achieving my childhood dream.”

Adler adds: “I have two Grammy awards that sit on my mother’s mantlepiece. I think she deserves three so this party isn't over.

"I was not given a choice in this and my dream is alive. Feel free to say hello if you see me mowing the grass. It never gets old. I appreciate each and every one of you. Thank you.”

Adler goes on to suggest he’s been in touch with Kyle Thomas and Myrone about the possibility of working on an Oakland Raiders concept album.

Announcing Adler’s departure in the summer, Lamb Of God thanked him, saying: “We're very proud of everything this band has accomplished over the last two decades. We would like to thank Chris Adler for his contributions over the years and wish him the best in his future endeavours.”

Lamb Of God brought in Art Cruz to replace Adler in the lineup.