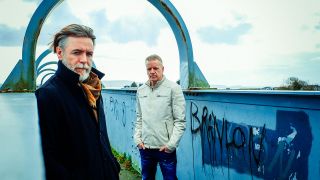 Chimpan A, the electronica inspired prog duo comprising Magenta's Rob Reed and former Story's singer Steve Balsamo, have released a trailer video ahead of the band's new album The Empathy Machine. You can watch the trailer in full below.

The Empathy Machine will be released on April 10 through Tigermoth Records. The band released their self-titled debut album in 2006.

"We’ve been working on this album now for an amazing 14 years, since the original album back in 2006," Balsamo tells Prog.

"It's been different," adds Reed. "Usually you look back on a record with some regrets over time. We’ve been able to park the record for months at a time, and when you come back , you can see the flaws, but there has to be a time when you finally say… It's done’.

"It might be a machine in the future that will be able to record how we're feeling," Balsamo explains of the album title. "That was the main theme.

"t's a form of virtual reality that can mess with your whole way of thinking, and can bring up your deepest, darkest desires. Digitally!" adds Reed.

Steve: ‘We’ve been working on this album now for an amazing 14 years, since the original album back in 2006.'