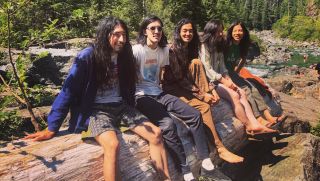 Kikagaku Moyo have released a video for their new single Nazo Nazo.

It’s the latest track lifted from the Japanese outfit’s upcoming album Masana Temples, which will arrive on October 5 via Guruguru Brain.

Nazo Nazo means "riddle" in Japanese, although the word "nazo" on its own means question or mystery with Kikagaku Moyo working with London-based filmmaker Elliot Arndt on the video

“This is the first song of ours which has Japanese lyrics. Guitarist and vocalist Tomo made the melodies while I was seeking different vocal sounds.

“The melody reminded me of an old Japanese folklore song and I thought Japanese might fit better than our gibberish sounds.

“Elliot asked me to translate so I sent him very strange translation, which made no sense, but somehow it made sense for him and he made the video. We were surprised how he used colour and how beautiful it is.”

Kikagaku Moyo will head out on tour across Europe later this year.

Masana Temples is now available for pre-order via Bandcamp.