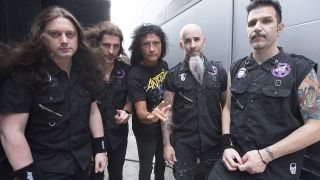 Earlier this month, the nominees for 2020’s Rock And Roll Hall Of Fame were announced.

The rock world was well represented with Motorhead, Judas Priest, Thin Lizzy, Soundgarden, T-Rex, MC5, Nine Inch Nails, Pat Benatar and Todd Rundgren all in with a shot of making it in next year. They were joined on the list by Dave Matthews Band, The Doobie Brothers, Kraftwerk, Whitney Houston, The Notorious B.I.G. and Rufus featuring Chaka Khan

And in a recent interview with Anthrax’s Charlie Benante on Sirius XM’s Trunk Nation, the topic of the Rock Hall was brought up – with the drummer saying his band deserve to be recognised for the work they’ve done in bringing metal to the masses.

He says (via Blabbermouth): “The reason why I think we should be nominated for The Rock And Roll Hall Of Fame is because of the stamp that we made on rock and heavy metal music.

“If it wasn't for us, there would be a lot of bands that wouldn't be around today. I don't mean to sound, 'Oh, this guy's got a huge ego,' but we introduced a lot of people to rap music and to that whole style that became nu metal.

“We never really talk about it too much, but since you brought it up, yeah. I think that's more important to The Rock And Roll Hall Of Fame, because of what genre it created and that genre created another genre.”

Anthrax formed in 1981 and have released 11 studio albums, with their most recent being 2016’s For All Kings.

The band will play at the Mohegan Sun Arena in Uncasville on November 15 and will join Slipknot at Knotfest Japan in Chiba on March 20, 2020.

Anthrax: For All Kings
Anthrax's 11th studio album For All Kings arrived in 2016 and features instant classics including Evil Twin and the anthemic title trackView Deal

Anthrax: Kings Among Scotland
Anthrax documented their 2017 tour with this live package recorded in Glasgow in the April of that year. The set celebrated For All Kings and their classic 1987 album Among The Living.View Deal