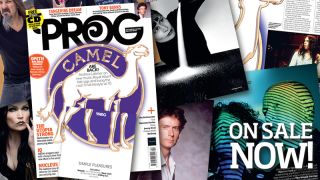 The new issue of Prog is on sale today, with prog legends Camel gracing the cover.

“We were all in such good spirits because these shows went so well that it seemed the natural thing to celebrate with a few drinks. Now I’ve reached 70 I’m living the rock’n’roll lifestyle,” Andy Latimer tells Prog. “The new line-up has got that sense of belonging that we’ve not had since the early days of Camel.”

Anyone who saw cover stars Camel on their last tour can be in no doubt that Andy Latimer is enjoying himself these days. With the prog legends about to release their new Camel At The Royal Albert Hall DVD, celebrating the band’s return to the hallowed London venue for the first time in 42 years, we sat down with Andy and discussed those legendary live shows, where the band are at right now, and most importantly, writing new music and a possible new album.

Heilung - a Dane, a German, a Norwegian. Some animal bones. And communicating with spirits. How prog is that?

Tarja - a catch up with the Finnish singer

Emmett Elvin - the Knifeworld man opens up about his own prog world.