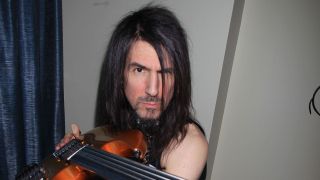 Ron ‘Bumblefoot’ Thal has moved to clear up the “confusion” surrounding Scott Weiland’s involvement with supergroup Art Of Anarchy.

The Guns N’ Roses guitarist formed the group with brothers John and Vince Votta as well as Disturbed bass player John Moyer. Former Stone Temple Pilots and Velvet Revolver frontman Weiland agreed to do vocals on the band’s debut album, due out in the spring.

But Weiland later insisted he was never part of the band and that he was simply hired to sing on the record – nothing more.

Bumblefoot tells Icon Vs Icon: “I know that right out of the gate there was a little bit of, I wouldn’t say controversy, but maybe some unnecessary confusion about things.

“If they do, Scott is very clear that his focus is his solo stuff and mine is too. Scott wants to just do his solo thing and isn’t looking to do any live dates with this.

“Then we would find a new singer, if we did any live shows. Who knows what would happen with that new singer and if it would become a permanent thing or if it would just be for the live setting. We don’t know.”

Weiland says his focus is entirely on his solo band, Scott Weiland And The Wildabouts.