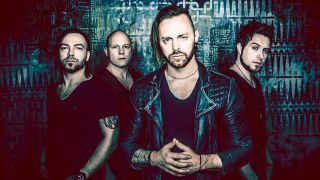 Following two UK dates which climaxed at London’s Alexandra Palace earlier this month, Bullet For My Valentine will extend their current Gravity tour into a headline slot for their first ever appearance at Slam Dunk festival.

BFMV frontman Matt Tuck tells Hammer, “Being asked to headline Slam Dunk off the back of Gravity is a massive compliment on how diverse our band is, we’re very happy and honoured that we get regarded as a headliner for Slam Dunk.”

Currently their only UK festival date next year, Bullet will bring their signature brand of metal to the Leeds and Hatfield stages in May 2019 where they’ll be joining Glassjaw, Turnstile, Simple Plan, The Menzingers, I Don’t Know How But They Found Me, Knocked Loose, The Get Up Kids, Save The Day, Tiny Moving Parts and Trophy Eyes who were also announced today.

“I think it’s good that a festival like Slam Dunk, which has punk rock and hardcore in its DNA, can throw in a metal band to spice things up a bit by throwing a Bullet into the mix. What matters is having a diverse and enjoyable lineup, that makes any festival better in my eyes.”

Since the album’s release in June, new tracks Over It and Letting You Go have slotted into their live setlist neatly among the classics such as Tears Don’t Fall.

“We always knew Gravity was a bit more contemporary, we wanted to appeal to a wider audience and that’s exactly what we’ve achieved. We can handle our own with any crowd and any band these days, our setlist after Gravity is eclectic so it’s already suitable for this headline slot – even if you’re not a fan of the band, there are a couple of our songs that you can get into.”

On the possible setlist for the show in May, Matt explains, “We’re keeping this headline slot as part of the Gravity tour. There’s a lot of songs on the record that we haven’t played live yet and we’ve rehearsed many times so they’re ready to go, maybe it would be cool to throw in some of the songs that weren’t meant to be singles but they still get a bit of the spotlight.”

Matt goes on to suggest that headlining a stage at Slam Dunk is just the start of a new era for the band.

“Bullet has always been about pushing the boundaries and rewriting the book rather than just rereading it, that’s opened the door for us to cross over into Slam Dunk and being asked to come in and headline at this stage in our career is fantastic.”

Slam Dunk takes place in Leeds and Hatfield on May 25 and 26. For ticket details and further information, head to Slam Dunk’s official website.