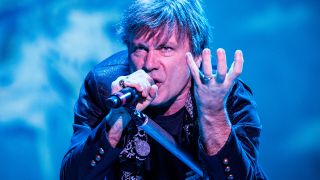 Cristina Rheims, who has named more than 200 species of spider in the past, has decided to honour her musical heroes from Iron Maiden, Def Leppard, Scorpions and Brazil’s Angra – and has created the new genus ‘Extraordinarius’ in the process.

Rheims tells PRI: “This is the kind of music I like and I usually listen to. I’ve always wanted to honour Rick Allen because I think he's an example.

“You have a drummer that loses an arm and he continues his career and he learns how to play with only one arm. So he's one of the 'Extraordinarius' as well."

Rheims also reports that Scorpions frontman Meine was delighted at the news and requested an official certificate, which she created and signed.

Rheims says: “I like to joke that now he has my autograph!”

The nocturnal arachnids grow to 2cm and are not dangerous to humans.

It’s not the first time creatures from the past and present have been named after rock stars.

A species of pistol shrimp are named after Pink Floyd, a half-metre worm that lived 420 million years ago is named after King Diamond, Cannibal Corpse bassist Alex Webster has an extinct monster worm honoured in his name and a Jusrassic crocodile fossil is named after late Motorhead legend Lemmy.

There's also trio of microbes found in the guts of termites named after Rush due to their “long hair” and “rhythmic wriggling”.