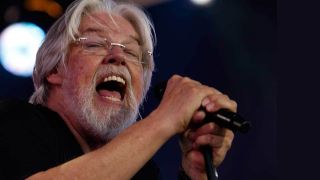 Bob Seger has released a new song, Finding Out. The track is available as a free download from Seger’s website.

Finding Out was originally going to be released on Seger’s 2006 album Face The Promise, but did not make the cut (in 2003, the singer told an interviewer he’d “really nailed the lyric”). Instead, the song was retrieved from the archive and recorded during sessions for last year’s I Knew You When album.

Last October, Seger cancelled the 19 dates of his US Runaway Train tour on doctor’s orders. Now, after surgery on his back, he tells Rolling Stone, “I’m feeling better all the time. They aren’t letting me lift anything over five pounds. I can’t do anything: no piano, no guitar, no nothing. But as soon as the pain stops, I’ll be playing again.”

The singer is currently halfway through a three-month recovery period.

“It’s maddening,” he told Billboard. “I’m just stuck here. But they warned me of this. They said it was going to really hurt for about three months afterwards, but the payoff is (the surgery) didn’t go anywhere near my larynx. They went in the back, so my voice is probably fine. So I think it’s going to be OK, I really do. But, God, it’s taking a long time…”

Bob Seger: the legend of the Ramblin' Gamblin' Man