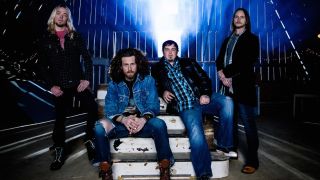 Black Stone Cherry have made their song In Our Dreams available to stream.

The tune follows The Way Of The Future as the latest preview of the band’s fifth album, Kentucky, due April 1 via Mascot Label Group.

Frontman Chris Robertson says the group returned to their roots to capture the follow-up to 2014’s Magic Mountain.

Robertson explains: “We are beyond excited to bring Kentucky to you. Since the release of our debut, we have wanted to go back to the studio where it all began and it finally happened. The original studio owner and engineer, all of the great equipment and Black Stone Cherry have been reunited for what I feel has been the most unique album we’ve ever made.

“We took it back to where it started and something magical happened. These new songs are the heart and soul of who we were in 2006 and who we’ve become. There is something very special about these songs and I cannot wait for y’all to feel them.”

Black Stone Cherry fans will get the chance to hear the new tunes when the group performs an intimate London charity gig on January 24 before launching the UK leg of the Carnival Of Madness tour with Shinedown, Halestorm and Highly Suspect next week.

The band will return to the UK to headline the Ramblin’ Man Fair in July.

Kentucky is available to pre-order in various bundles, including limited-edition coloured vinyl.