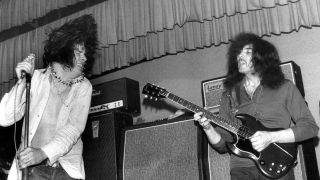 A collection of Black Sabbath-related memorabilia is to go on sale at a Sheffield auction on September 30.

Dating from 1968 until 1973, the range includes a number of personal postcards from Ozzy Osbourne to his parents in Birmingham while on the road, as well as handwritten lyrics, photographs and tour posters from the group’s early days under the banner, Earth – shortened from their original band name, Earth Blues Company. It will be sold as one lot at an estimated starting price of £2000-£3000.

Stephen Flintoft, specialist music valuer and auctioneer at the Sheffield Auction Gallery, tells The Antique Trades Gazette: “Perhaps the most interesting item, among so many, is the handwritten lyrics headed ‘by Earth’ to the song Changing Phases, a title later changed to Solitude, which featured on the 1971 double platinum Black Sabbath album Master of Reality.”

The sale room says the collection was saved by a Sheffield resident from a London Docklands property which was being demolished in the 1980s. Photographs of the items to go on auction can be viewed below.

Ozzy is currently being sued by former Sabbath bandmate Bob Daisley for $2million in unpaid royalties for song Crazy Train. The 67-year-old is also receiving treatment for sex addiction after it was revealed he had been having an affair with his hairdresser.

Black Sabbath are currently trekking North America on their The End farewell tour.

It was also announced last month that the late David Bowie’s art collection will be displayed and put on sale at London’s Sotheby’s gallery this November.