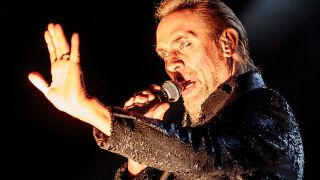 Earlier this month, Bauhaus vocalist Peter Murphy was rushed to hospital after suffering a heart attack in New York.

The medical emergency occurred before his planned residency show at the city’s Le Poisson Rouge, with Murphy becoming unwell after complaining of a shortness of breath.

The vocalist has now given an update and says he’s made a full recovery.

Murphy says: “Following my recent episode in New York City with my heart attack and being admitted into Lenox Hill Hospital and seeing myself go through the rigours of intensive care, I am very happy to say that I have made a full recovery.

“Thanks to the superb team of doctors, specialists, nurses and care staff. I am so glad to say I am up and running again.

“My tour manager Brian Lowe and my assistant Chantal Thomas were directly instrumental in saving my life and to whom I cannot thank enough.

“I also want to thank every single friend and fan who has been supporting me throughout this ordeal. I remain grateful especially to my Bauhaus band mates .

Murphy has also urged people to make a donation to The American Heart Association rather than send him flowers or gifts.

Murphy was due to play a further four shows at Le Poisson Rouge, with newly rescheduled dates to be announced in due course.

Last year, Murphy and bassist David J toured across Europe to celebrate Bauhaus' 40th anniversary where they played their 1980 debut album In The Flat Field in full along with other Bauhaus classics.