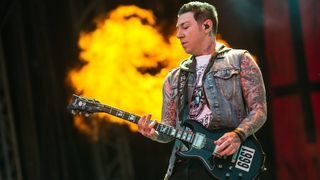 The band are locked in a legal dispute with Warner Brothers over a contract breach. Last month, they sneak released their new album The Stage via their new label Capitol Records.

The guitarist says they jumped ship because they wanted more room for creativity on the follow-up to 2013’s Hail To The King – and didn’t want to be “weighed down” by the business side of music.

Vengeance tells Full Metal Jackie: “To be honest, we never, ever let business weigh down the creativity of this band. In fact, the reason we have switched labels is because we put our artistry first and we wanted to be somewhere that cared about our vision.

“When we hear our fans say that we helped save their life, or somebody who’s terminally ill comes to us and wants to meet us as one of their last wishes, it means a lot more to us than us being a profit-and-loss statement. So we had to find a home that agreed and wanted to be a part of it.”

He adds: “As you can see, with all the things that we’ve been up to and doing and the songs on the album, an eight-and-a-half-minute single, a 15-minute song – Capitol Records just truly respect the artistry. That’s where our heads have been. We’ve never, ever let the business stuff weigh us down.”

Frontman M Shadows recently claimed an Avenged Sevenfold Best Of compilation album, which Warner Brothers announced for release next month, was an attempt by the label to “undercut our sales and confuse casual fans.”