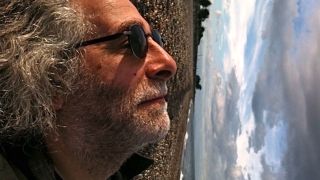 “For a guy who can’t play guitar or keyboards, I haven’t done too badly,” says Kevin Godley, with a fair degree of understatement. In the ‘70s, Godley’s art rock band 10cc scored a series of hits, most notably the innovative and enduring smash, I’m Not in Love. Godley and his songwriting partner Lol Creme left the band in 1976 to form the duo Godley & Creme, and while the two did find chart success with a number of cuts (1981’s Under Your Thumb peaked at No. 3 in the UK), their greatest impact stemmed from over 50 videos they directed in the MTV-dominated ‘80s.

Indeed, it was hard to turn on the video music channel during the decade and not stumble across a Godley & Creme-directed clip: The Police’s Every Breath You Take, Duran Duran’s Girls on Film, Herbie Hancock’s Rockit, Frankie Goes to Hollywood’s Two Tribes, Wang Chung’s Everybody Have Fun Tonight – the list goes on and on. And in 1996, Godley himself created a memorable video for Real Love, which featured the three then-surviving Beatles “reuniting” with John Lennon on a previously unreleased demo recording.

Even so, Godley takes it all in stride. “Whenever somebody gives me a compliment or tells me how much something I’ve done means so them, it always feels like they’re talking about somebody else,” he says. “I don’t live in what I’ve done. I only live in what I’m doing.” He pauses, then adds, “I very rarely get people saying, ‘I think that was really shit. I wish you hadn’t done that – I really hated it.’ I guess if they thought that, they wouldn’t say anything.”

And for the first time ever, Godley is writing songs on his own. His solo compositions turn up in Hog Fever, an “ear movie” he created with novelist Richard La Plante that stars legendary actor Terence Stamp. “It was a pretty steep learning curve, turning a visual idea, which the original screenplay was, into an audio idea,” says Godley. “We couldn’t use any ideas that were based on pictures, because it just didn’t make any sense. But I’ve always enjoyed a bit of risk. That’s when things are the most fun, when you ask yourself, ‘Has anybody ever done thing before?’”

Hog Fever can be ordered now. Below, Godley runs down his selections for the 10 records that changed his life.

“As soon as that record came on, I started hammering out a beat on my school desk. I was consequently thrown out of the class and put in detention. I was actually punished for enjoying Hound Dog, so that was quite significant to me.

“Seeing Elvis on TV was remarkable. It gave a whole new meaning to that thing dangling between my legs. We were all so affected by Elvis. We were looking for something, even though we didn’t quite know it. Elvis was the start of everything.”

“Shazam was the first 45 I ever bought, and so right there it’s pretty important to me. I would play the record thing over and over. It was a meaningful moment. It was my moment. It was something that belonged to me. Whether I knew it or not at that time, it was a signpost, I guess.

“I didn’t know yet that I wanted to pursue music, but the sound this record made — this incredible noise — it was a visceral experience, just like Hound Dog. Shazam, more than anything of that particular period of time, just nailed it for me. That twangy guitar sound, that roughness – I just loved it. It was simple; it wasn’t hard to digest. It said everything that needed to be said without any words.”

“It was the moment when it all clicked. Before the Beatles, everybody had stage names, and they looked like manufactured teenagers. Everything about the Beatles was different. It was an extraordinary time – youth was discovering itself. We’d all been tapping into American culture up to this particular point. When the Beatles came along, suddenly people in the UK could say, ‘Hey, not only are we cool, but we’re cooler than anybody else.’”

“I think I was just beginning my tenure at art college at that time as well, so I was stuck right in the middle of all this creativity firing off in many directions at once. It was wonderful. Suddenly, there were no limits. I’m proud for that moment to have happened. Please Please Me was the start of so many great things to come.”

“A friend of mine, who ended up becoming 10cc’s live sound mixer, was one of the first people to get a Dylan album. He said, ‘You have to listen to this. Come around to my house, sit your ass down and listen to this record.’ At first, I was like, ‘Who is this whining fucker?’ But just as quickly, I said, ‘Hang on a minute. There’s something going on here that I don’t quite understand. I have to hear that again.’

“Pretty soon, Dylan was on all the jukeboxes at art college. It was so different from everything else. It was saying in words what we were learning in paint and design. It was doing stuff with words that I’ve never heard before. This new vocabulary was staggering. It was a whole new thing plugged into pop music. A whole new thing we could play with, another invention that was adding to what we now understood music to be. It was exhilarating.”

“Just a beautiful song, so simple but powerful in a gorgeous way. It was a magic moment when that record came along. What a tune and what an extraordinary simple structure – it doesn’t really sound simple, but it is. Each line in the verses ends with the same word, which is quite incredible.

“Sheer, unadulterated angelic beauty, which is what the Beach Boys were all about. There was no hard edge to their sound, but the soft edge that they had, the lightness of it, was just as powerful as what we understood rock‘n’roll to be. It was complete. It wrapped you up in a wonderful way.”

“What a great track. I’ve always loved Motown, but for some reason, the beginning of this riff seemed sums up the experience for me. It was like the perfect record for its time. Of course, no time is the wrong time for something this great.

“I heard it for the first time at art college. I didn’t learn a damn thing there, other than how to dance and smoke weed. This was one of my favourite songs to dance to, wearing my 22-inch plats. We used to have a thing at the local pub every Friday night. People used to dance their socks off and get completely wrecked. A lot of great music was played, particularly Ain’t That Peculiar. I just loved it.”

“I love Tom Waits. Popular music seems to go through various cycle changes, and it tends to lose the rough edges and the element of surprise; it becomes lame and predictable. So it was pretty special when I discovered Tom Waits. Suddenly, it was like, ‘Here’s a guy who’s saying things in a raw way. He’s telling the truth; he’s telling you secrets. He’s acting.’ Listening to him was almost like watching a play.

“This isn’t just music – it’s an experience. When you listen to Tom Waits, it’s as if he’s living inside your head. This particular track is like a horror film. I want to know what he’s building in there, but I never do find out. It’s a cliffhanger song.”

“This is the moment in my life when my two great loves, music and pictures, came together in a perfect way. We’d always made music and we’d always made pictures, but the two weren’t always usually successful. Here we were able to fuse the two, and it became a huge hit and validated the commercial aspect of what we did.

“The song took 15 years to write. We had the first verse, but we could never take it any further. Once we went into the studio with Trevor Horn and Steve Lipson, that’s when we managed to take it all the way. But again, it’s the whole package, that we had an idea that was visual and an idea that was aural, and they came together to create this entity called Cry. People still talk to me about to this day. It was a fabulous moment for us.”

“I love most everything that Bowie did. He was always fascinating to me. Losing him is like losing some gears out of your engine. Like many people, I figured he was immortal. He was a trailblazer, no doubt.

“Fame is a particularly great song, and of course it also features John Lennon. I love that whole thing where they’re using a harmonizer to bring the word ‘fame’ down, down, down. It’s just got such a rich groove to it. A fantastic recording from top to bottom.”

“It’s a track from Hog Fever, which people can hear when they listen to the ‘ear movie,’ as we call it. Not to blow my own trumpet, but it’s the first song that I’ve ever written on my own. Everything I’ve done over the years has been a collaboration of one form or another, because I don’t play an instrument, you see. I sing and I play percussion, but I don’t play guitar and I don’t play keyboards.

“For some reason, I managed to write some songs for this project, which is essentially a play about a middle-aged biker looking for his lost youth via the Harley Davidson legend. The whole thing takes place in the consulting room of a psychiatrist, played by Terence Stamp. To direct Terence Stamp was a hell of a thrill for me, even though I had to do it via Skype. I have to imagine that’s never been done before.”