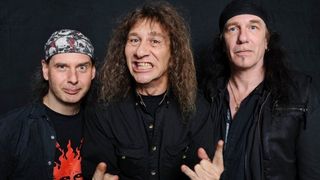 Anvil are “halfway through” filming their new documentary.

Though they’re keeping details of the as-yet-untitled film under wraps, the Canadian metal veterans say it’s nothing like 2008’s Anvil! The Story of Anvil.

Frontman Steve ‘Lips’ Kudlow tells MetalTalk: “We’re not talking about it, because there’s no point, because it’s a long way off. The filming is about halfway through, and it’s not done yet. So what are we talking about? It’s gotta get done first.”

Drummer Robb Reiner adds: “We’re really busting at the seams to tell people about a lot of it, but it’s just not the right time to get into it, that’s all. But when it comes out, it’s gonna, I think, surprise the shit out of everybody.”

After The Story of Anvil showed the band changing their own lives, Lips says the new film will show them changing everyone else’s.

He adds: “It’s not gonna be what you expect it to be. Part of it is what happened after the first movie, but, really, where it’s gonna go from there is nothing like the first one at all.

The pair also confirm they’ve written six new songs for the follow-up to this year’s album Anvil Is Anvil – and say they’ll begin recording their 17th record next year.

Lips: Anvil will keep playing until I die