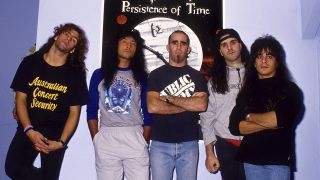 Anthrax have announced they’ll celebrate the 30th anniversary of their fifth studio album Persistence Of Time by issuing a remaster later this year.

The 1990 album was the band’s last to feature frontman Joey Belladonna before his return to the fold for 2011’s Worship Music and features Anthrax’s cover of Joe Jackson’s Got The Time.

Persistence Of Time will be released on August 21 on 2CD/DVD and 4LP and feature revised cover art.

Anthrax say: “The 40-minute ‘guerilla-style’ DVD was shot when Anthrax was on tour with Iron Maiden in 1991 and features live footage of Charlie Benante taking over the drums for Iron Maiden's Nicko McBrain, as well as backstage and dressing room footage with members of both bands.

“The piece wraps with Benante, Frank Bello, and Scott Ian joining Iron Maiden on stage for the final song of the night, Sanctuary.”

DVD
Behind the scenes on Persistence of Time Tour