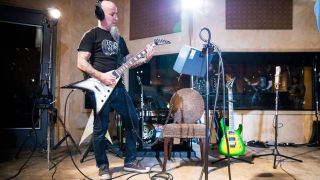 Anthrax are recording a track for the upcoming Game Of Thrones mixtape.

Guitarist Scott Ian uploaded a studio picture of himself to Facebook and Twitter, alongside the project’s hashtag #CatchTheThrone.

It comes after Killswitch Engage confirmed they had recorded a song for the record, which sees Game Of Thrones producers HBO asking metal, rap and hip-hop bands to perform songs inspired by the series.

Scott Ian has previously told of his love for the show and said he would have liked to record some of Anthrax’s upcoming new album on the set. Ian is set to appear as a zombie on another of his favourite shows, The Walking Dead.

Meanwhile, Game Of Thrones has been named the most illegally downloaded TV show of 2014. According to Entertainment Weekly, it was downloaded more than eight million times this year.