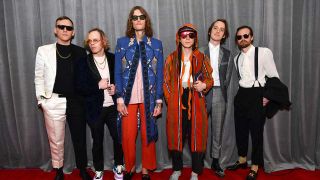 The annual Grammy Awards have thrown up the usual list of surprises and baffling presentations, with lightweight Kentucky alt-rockers Cage The Elephant winning the award for Best Rock Album.

The band, whose Social Cues album was released to in April, beat out stiff competition from The Cranberries, Rival Sons, Bring Me The Horizon and I prevail.

"I was just trying to thank God in my mind," said singer Matt Schultz in a post-awards interview. "Trying to keep focussed on love."

The Metal Performance Grammy went to Tool, for 7empest, taken from last year's Fear Inoculum album.The other acts on the shortlist were Candlemass, Death Angel, I Prevail and Killswitch Engage.

Other winners included Gary Clarke Jr., whose politically-charged This Land picked up the Best Rock Performance and Best Rock Song Grammys, and the late Chris Cornell, who was awarded the Best Recording Package prize for the deluxe edition of his posthumously released Chris Cornell collection.

The awards were greeted by the now traditional mix of dismay and bewilderment. Anthrax founder Scott Ian, who live-tweeted the ceremony using the persona 'Grandpa Metal', wrote, "Some people don’t believe the Metal Grammy even exists because it’s not televised. What doesn’t exist is respect for Metal from the Grammys. To quote Public Enemy, 'Who gives a fuck about a goddamn Grammy.' Kanye. Kanye does. Fart."

Organisers also drew criticism from followers on social media, who pointed out that the name of late Cars singer Ric Ocasek had been spelled incorrectly during the In Memoriam segment.

The ceremony included a live performance from Aerosmith, who played Living On The Edge – during which Steven Tyler and Joe Perry left the stage to perform amongst the guests – and Walk This Way, where they were joined by Run DMC. Drummer Joey Kramer, who brought a legal action the band last week, was not onstage.

Some people don’t believe the Metal Grammy even exists because it’s not televised. What doesn’t exist is respect for Metal from the Grammys. To quote Public Enemy, “Who gives a fuck about a goddamn Grammy.” Kanye. Kanye does. Fart.January 27, 2020