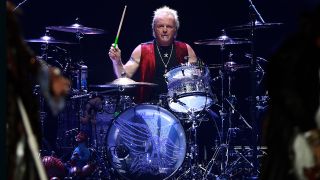 It was the eighth night of the band’s Sin City residency, which kicked off earlier this month.

Fans have shared footage of the performance on social media and have voiced their concern for the drummer. Kramer’s tech John Douglas took over behind the kit.

There’s been no official word from Aerosmith as to why Kramer didn’t perform, but reports on the AeroForce forums earlier this week suggested that Kramer and frontman Steven Tyler shared an argument during their show on April 16.

The drummer also had a health alert back in 2014 when he had to undergo heart surgery after collapsing on tour.

Reflecting on the incident in 2016, Kramer told Rolling Stone: “It surprised the shit out of me when it happened. I exercise every day, I’m conscientious about my health. I thought it was heartburn or indigestion.

Aerosmith’s next show at the Park Theater at the new Park MGM resort will take place on Friday evening.

Yes, John Douglas played all the show. That's why I'm asking what happened with JK or if he is ok...😯 pic.twitter.com/rRJH5uC8GjApril 24, 2019