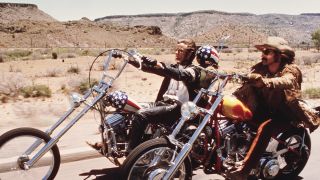 It’s from the association of motorbikes and rock music that heavy metal was born. Steppenwolf’s cry of “heavy metal thunder!” on their 1969 Easy Rider soundtrack anthem gave us a description of both the bike and the sound of distorted electric guitars and drums, spearheading the imagination of an entire genre. The look and attitude of 50s and 60s biker gangs – denim, leather, studs, patches, long hair - remains a crucial element of metal’s aesthetic, but the lyrical obsession with these iron horses and stallions of the highway was largely confined to the 1969-82 period. Possibly something to do with Evel Knievel.

A fair old rocking headbanger from Creedence Clearwater Revival, paying tribute to a massively popular 70s pastime that’s now almost totally defunct, thanks to serial killers. The rider spots a sexy lady thumbing a lift, is distracted at high speed, comes off his bike and is later passed by the hitchhiker with another ride. ”We could make music at the Greasy King,” he implores, referencing a burger stall near the band’s rehearsal space (Cosmo’s Factory) in Berkeley, California.

Key lyric: “Was busted up along the highway, I’m the saddest ridin’ fool alive/Wond’ring if you’re goin’ in my way, won’t you give a poor boy a ride?”

There are more obvious Priest biker songs – Hell Bent For Leather, Heading Out To The Highway, Freewheel Burning - but none have the dusky emotive surge and mesmeric transportive qualities (or funky bassline) of Desert Plains. The biker embarks on an overnight ride across deserts and mountains, to the lover awaiting his return. This steady, elegant biker ballad remains a live favourite, and was a mainstay on Priest’s most recent tour.

Key lyric: “The road is straight cast, wind’s in my eyes/The engine roars between my thighs”

This Meat Loaf classic is a divisive beast, but there’s no denying, or taking for granted, its outlandish majesty and power. A ribald tribute to 1960s ‘teenage tragedy’ songs (usually girls widowed by bike crashes) from the perspective of the doomed rider, upping the ante beyond its logical conclusion. The climax – where the heart bursts out of his chest and flies off – still seems like a surprising turn of events, even after 40 years.

Since 1981, Dumpy’s Rusty Nuts have been an ebullient mainstay of the UK biker circuit, generally having too good a time on the road to bother releasing records. A shame, as this early seven-inch paean to the popular Surrey biker run should have been a Top Ten hit; with its infectious chorus chant and good-time delivery, it nails the sweet spot between heavy metal and Chas & Dave. DRN even changed their name to Bolts for the single release, fearing they wouldn’t say Nuts on the radio. Didn’t make a difference, alas.

A Band Of Gypsys original from 1969, first released on posthumous collection Cry Of Love, there’s a manic, propulsive energy to this heavy funk/proto-metal scorcher, Jimi’s reflection on 1969’s hit biker movie. Tackling the film’s jaded nihilism, Hendrix brings his own radiant positivity to the theme, helping to cement the crucial early association of hard rock and motorbikes.

“A simple boy meets girl story, complicated somewhat by the presence of a motorcycle,” says RT of this dramatic folk take on the dead biker motif. With scintillating finger-picking, soulful vocals and dark romantic lyrics, 1952VBL has become one of the first Fairport Convention guitarist’s best loved works. RT remembered the titular vehicle from his childhood as “the exotic bike… The one you went ‘ooh, wow’.” Built in Stevenage, Vincent Black Lightning was the world’s fastest standard motorbike.

Key lyric: “I’ve fought with the law since I was seventeen/I’ve robbed many a man to get my Vincent machine.”

Opening with a bit of comedy modernist plainsong, Golden Age Of Leather is a thrilling apocalyptic narrative about an apparent suicide pact between a gang of old bikers, riding their Harleys into a massive collision during a desert storm. Musically it’s quite a journey too, after two minutes of Blue Öyster Cult’s sprightly AOR it gets darker and faster with an eerie guitar motif, stopping and starting from hard chords to soft harmonies, ending with a mournful slow fade.

Key lyric: “Bodies and bikes beyond repair/Smell of oil and gas in the air”

Originally written by the Magic Band in the mid 60s, the song didn’t emerge on record until 1978 (rerecorded from a 1976 version, unreleased due to a financial dispute with Frank Zappa), in the middle of the biker song’s golden age. And it’s a raucous, swampy slab of prime Beefheart madness, opaquely documenting the tale of the Magic Band’s original guitarist, Alex St Clair, motorbiking the 900-mile round trip from California to visit his mother in Carson City, Nevada.

There’s an odd one-off songwriting collaboration behind this abiding anthem from the earliest days of Motörhead: drummer Phil Taylor, roadie Mick Brown and Guy ‘Tramp’ Lawrence, a London Hell’s Angel and pal of the band. On the evidence of this lumbering classic they should have written more together, although the original 1975 On Parole recording is far lighter and funkier than the greasy thud we know and love.

Key lyric: “Wasted forever on speed, bikes and booze/Yeah us and the brothers say we’re all born to lose”

We’re spoilt for choice with NWOBHM motorbike songs. Urchin’s Black Leather Fantasy, Centurion’s Two Wheels and Samson’s mind-boggling I Wish I Was The Saddle Of A Schoolgirl’s Bike are worthy contenders, but there’s no denying the champion. Saxon already penned a worthy biker anthem in1979’s Stallions Of The Highway, but Motorcycle Man is arguably a contender for the band’s best song; infectiously basic riff, relentless momentum, powerful vocals, and a beserk solo preceded by a cheeky wolf-whistle.

Key lyric: “I can beat your street machine/I’m taking risks, that’s what I mean”

Some biker playlists drop this one altogether, reckoning it ‘too obvious’ and ‘dated’. No short shrift here: Born To Be Wild is not only the definitive proto-metal text on the subject, it’s still got palpable attitude and swagger, a driving riff and irresistible scream-along chorus, plus limitless versatility; it’s the only song ever covered by both Slade and Slayer, and so far the only musical collaboration between Ozzy Osbourne and Miss Piggy.

Key lyric: “I like smoke and lightning/Heavy metal thunder!”