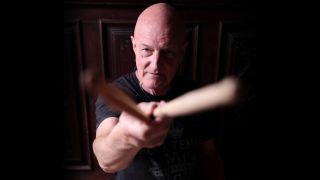 Former AC/DC drummer Chris Slade is rumoured to be rejoining the band in place of wayward sticksman Phil Rudd.

The band are due to play at the Grammy Awards ceremony in Los Angeles next week, but Rudd isn’t allowed to leave New Zealand as a result of his court case over charges of threatening to kill and drug possession.

Slade was set to make a publicity appearance at The Optometry Practice in California on Saturday, but cancelled at short notice. Dr Alex Robin Liu, who owns the establishment, said via Facebook: “There’s actually big news regarding Slade and his career coming in several days, which is why he had to reschedule this event.”

Asked if the news was related to a band “spelt with four letters and a lightning bolt” Liu responds: “I am not totally sure to be honest with you. I am hoping for that!”

The Welsh drummer originally joined AC/DC in 1990 and was replaced when Rudd was brought back in 1994.

In December Slade admitted he stopped playing for three years after the split, describing it as “a real kick in the balls.”

Rudd recently insisted he’d be with the band when they tour in support of 17th album Rock Or Bust – their first without mainman Malcolm Young.