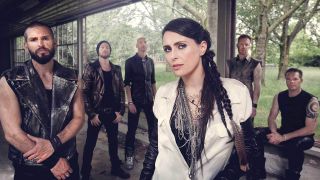 It already seems like a lifetime since Within Temptation were last in action – with 2014’s star-studded Hydra album taking them to unprecedented heights around the world, including a blockbuster headline show at Wembley Arena. This year not only sees the Dutch symphonic heavyweights get back in the ring, but will also give them some opportunities to indulge in some more personal endeavours.

“All the bandmembers have some sort of side-projects this year, and so have I!” exclaims Sharon den Adel. “My solo project is coming and is called My Indigo, and I will release my solo debut album in 2018, too.” Promising to be a much poppier affair than she’s usually known for, Sharon is keen to stress that the project won’t distract from what will be a big year for her and her bandmates.

“We’re all mainly focused on finishing the new Within Temptation album and pushing ourselves in a new direction once again on a music level,” the singer reassures us. “If we succeed in doing that, the rest of what comes from that this year will follow by itself.”

While saying that “it’s just a bit too early” to confirm where the album will go lyrically, when we brought up the potential of returning to the conceptual heights of 2011’s The Unforgiving, which featured a fully blown plot and accompanying comic book, she didn’t dismiss the idea by any stretch.

“We still have to finish the lyrics for this album,” Sharon offers, “so I can’t tell you much about it conceptually yet. Sorry! But yes, we might do [a return to high concept]. I loved doing it on that album!”

As for the idea of reeling in special guests once again as on Hydra – which saw appearances from former Killswitch frontman Howard Jones, Tarja Turunen and hip hop legend Xzibit (yup, that happened), Sharon is similarly vague but very much open to the idea.

“Well, we’ve still got a wishlist of people we’d like to work with, so who knows… probably?”

If it sounds like it’s still quite early days in the writing and recording process, that’s because it still is, but we should still expect to see the new album land by autumn time, with a mighty, Hammer-sponsored UK tour coming in November.

“We’re actually almost done writing,” Sharon says of the new material, “but we would like to write two more songs. At the moment, it sounds a bit more modern, and it’s heavy in a different way than you are used from us. We like to challenge ourselves in the writing process, and we will also change the setlists a bit more often, and maybe make some new arrangements.”

And when it comes to those shows later in the year – which Sharon says may include another Black Christmas spectacular – the band have some grand plans: “They’ll be something different and special like always,” she grins. “But we’ll be setting more things on fire for sure!”

Find out what the biggest and best bands in rock and metal have planned in 2018 – only in the latest issue of Metal Hammer. Buy it directly here or become a TeamRock+ member to read it right now.