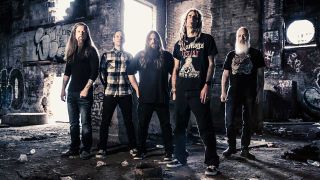 Lamb Of God have stunned the metal world by announcing a surprise covers album that they’ll be releasing under their original moniker, Burn The Priest. In an exclusive interview, we dropped Randy Blythe a line to find out what the hell’s going on...

So you’re releasing an album of punk and hardcore covers as Burn The Priest. How did it come about?!

Randy Blythe (vocals): “We, as a band, started off playing mostly in the punk rock and hardcore scene, because the metal scene as it exists today didn’t exist then and that’s where we grew our audience. We’ve been talking about doing a covers record for a long, long time, and for us to go back and cover thrash metal bands or something like that would be kind of silly because it’s really close to what we do. So we wanted to do a record that showcases [some different] stuff that would have influenced us back when we were really just beginning as a band.”

Why are you releasing the album as Burn The Priest instead of Lamb of God?

“We’re calling it Burn The Priest because those are the songs that would have been influencing us at that time. For us, I think there really is no difference between Burn The Priest and Lamb Of God. It’s not like we changed personnel or anything, the band just got older. So we figured, ‘Let’s just do it as Burn The Priest!’ We own that name and it’s still us. It’s not like we turned into a different band. I guess for us it seems natural.”

There are some deep cuts on this thing! Tell us about some of the song choices…

“We covered a band from Richmond called Sliang Laos. They’re a huge influence on us as a group, but they never put their record out. We have it – it’s recorded and it’s immaculate – but that record never got out, so Mark [Morton, guitar] and I both wanted to do this song called Axis Rot to draw some attention to the music. And Willie [Adler, guitar] is a big Agnostic Front fan and he suggested Agnostic Front’s One Voice. We did a Cro-Mags song – We Gotta Know – because I’m a big Cro-Mags fan. And we covered Melvins’ Honey Bucket, which Mark wanted to do. I would have picked an older Melvins song but he wanted to do Honey Bucket, so we did that.”

Are there any curve balls on there, in your opinion?

“There are a couple of surprises, including a Ministry cover. Mark and John [Campbell, bass] were recording it and I came in one day and they’re like, ‘We covered [1991 single] Jesus Built My Hotrod’, and I was like, ‘Really? That’s fucking ridiculous. That doesn’t make any sense!’ Ha ha! But then we played it and it was super-fun, just off the cuff. It was really easy the way the songs came together. We recorded 11 songs and one is a b-side. I could have recorded a million songs because I’m a huge punk rock fan.”

Why did you decide to release the album as a surprise?

“Because I’m fucking sick of everybody knowing everything in advance! Everybody today has this idea that they have the right to know everything at all times in advance. That’s the fault of social media, I believe. People give away too much. Plus, I think that if you start talking about something too far in advance, it reduces the impact of it. And I enjoy the element of surprise. I like mystery. I like when bands do cool shit. Keep ’em on their toes, man.”

If you’ll allow us to play devil’s advocate – why do a covers album instead of working on new music?

“Because I don’t feel like writing new music right now and we’re still on our last album tour. People always ask me if we’ve got plans for a new record or whatever. No! When we do, we’ll tell you. Writing new Lamb Of God music is not fun. Writing and recording a new record for some of the dudes might be fun but for me it fucking sucks. I hate recording. I always have and I always will. We’re a very contentious sort of band, creatively, and that’s no secret, so having something that’s easy and where we can all agree with each other – which is a rarity – and just sit down and have some fucking fun, is nice, man.”

For some fans, this will be a primer on old-school punk and hardcore. What can they take away from these songs?

“For some of them, social and political awareness. That’s what punk rock is about. I find all too often that metal is about nothing. Screaming and whatever. Not all metal, of course, but music should mean something, and that’s what punk and hardcore’s about. It’s true to the heart.”

What do you most fondly remember about the Burn The Priest days, looking back?

“I remember that it was in many ways so much cooler than now. The internet hadn’t oversaturated the market with eighteen hundred fucking million bands. It was a newer, more exciting time to be in a young band. I think it was a better time than now, absolutely. That may sound like me being a curmudgeonly grumpy old man but maybe that just comes with any sort of creative thing you do in a group; the beginning is more fun, when you’re all wide-eyed and innocent and you haven’t been ground down into a state of bitterness and despair by the industry yet. Ha ha ha!”

Legion: XX is out May 18 via Nuclear Blast and is available to pre-order from Amazon.