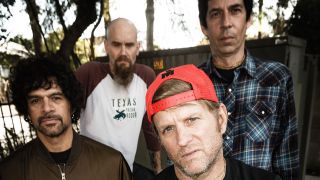 If you’re after a definitive hand to guide you through New York hardcore’s many twists and turns, you really need look no further than John Joseph. A crucial part of the scene since its nascent beginnings, Joseph has fronted legendary NYHC pioneers Cro-Mags in various configurations since 1984, and has contributed to countless bands and records over the years.

Now, he’s joined forces with fellow punk rock alumni Joey Castillo, Nick Oliveri and Todd Youth to form Bloodclot, a hardcore “supergroup” hoping to breathe new life back into the scene. To mark the upcoming release of new album Up In Arms, we’re exclusively streaming new track Manic for you to check out below. “The music for Manic was sent to me from Todd who was in L.A.,” explains Joseph. “I listened on my iPhone while I was in the gym training, left immediately, went home and wrote the lyrics. It’s that kind of a feeling. Lyrically, it’s about people mistaking kindness for weakness – big fucking mistake.”

To celebrate the new album and its place in his NYHC heritage, Joseph takes us through the 10 bands from his city that mean the most to him. You can hear Bloodclot’s new track at the bottom of the page.

“Even though they came from DC, they came up here [to New York] in ‘79 and really started the whole New York hardcore scene. The stage presence, the music, the musicianship – they were great musicians, they brought great crowds, they had great albums. It was an exciting time in music, because it was new. We would be influenced by bands like Black Flag, but we wouldn’t go and write their music. We would take it all in and spit it out our own way, and that’s why there was so much diversity in the scene back then – you had Black Flag, Dead Kennedys, Bad Brains… All these different bands that all sounded different.”

“The songs are good, the musicianship [is good], and then live they were just an incredible, incredible band. To me, music is subjective – I’m a musician and the ability of them playing their instruments and everything else, to me that was an example. My whole thing is, if you look at Quicksand, they didn’t try and… There’s a lot of music that’s coming up that sounds exactly the same. You have to do your own thing, and that’s one of the things they had.”

Sick Of It All

”[It’s] the energy live – they’ve been doing it for so long and they just bring it every single night. I’ve never seen a bad Sick Of It All show, never. It’s inspiring to go watch them play, because they started in the mid-80s and they still go out there and give it their all every night and believe in what they do – and they’re great people, too. There’s some bands, and some… [pauses, sighs] ex-members of bands that ruin the fucking band because they’re assholes to people. We certainly remember with [Cro-Mags], at some points we got people walking out of our shows because of what people were saying on stage and how they were treating fans. Sick Of It All, they treat everybody respectfully, and that’s why everybody loves them. You can be a talented fucking band and be a bunch of wankers and you’re gonna not have longevity, especially in this type of music, because there’s no rockstar bullshit attitudes in this music, in this scene. Punk rock and hardcore don’t go for that shit. You can’t be dicks and have longevity in the scene, because people aren’t going to come and support your band.”

“They had great records, great musicianship, and touching songs y’know. [They were] always great live, back in the day. When Born To Expire came out we were labelmates and I got to see them do some good shows.”

“I mean, the energy live – they care, [and] they carry the torch now. That’s another one of those bands that are just chill, cool with everybody; they’re the chillest guys that you’d never want to fuck with [laughs]. It’s the same thing – I’ve never seen any of them do a bad show. They go out and give it their all, and they’ve been doing it, I dunno, they started in the ‘80s – since ‘88? – so 30 years or whatever almost. It’s the songs, too. They’re heavy but they sound different – they’re original [and] they did their own original shit. There are certain bands if they play, I’m going to see the show [laughs]. If Madball’s playing the city, I’m going, because I know it’s going to be a good show, and there’s certain bands everybody comes out to see. When Madball plays, everybody comes out.”

“The longevity of what they’re doing – really the older stuff, Victim In Pain, the song Power – it captures a certain mood that was existing in New York back then. Roger’s got street cred, man! Vinnie, too. To see them doing it for this many years, and to still go out and give it their all night after night after night – Pokey is a great drummer, [they’re] great guys. Roger is a fucking great person, and character has a lot to do with me – like I say, if someone is a dick or an asshole, I’m going to be not into your band, and those guys have always been chill. I remember seeing them back in the day, way back in CBGBs. It was weird, because it was always this thing, people thought there was this beef between Cro-Mags and AF, and it was not the case. Shit happens, y’know, there was always testosterone flowing and shit happening, back in the day – stupid shit – but at the end of the day, we’re all friends now.”

“The musical ability, the hooks, it was a little bit of that post… I can’t say hardcore, I mean it was hardcore, but [with] more musicianship. Great songs, Chaka’s a great frontman, Chris Traynor – amazing guitar player. We got to do some shows with them back in the day. When I train for Iron Man [Triathlon], I have playlists, and I have two or three songs from Orange 9mm on those playlists. They bring the energy live, and putting on the record is inspiring still to this day. There are certain bands I’ll go see live, and I love ‘em. But am I going to listen to their records? Not really. But certain bands, for the musicianship, you could just put the record on and be like, ‘Holy shit’. Orange 9mm was one of those bands, Quicksand was one of those bands, Bad Brains was one of those bands.”

”[I like] the great message of [this] band. They formed in ‘87, Civ and Walter and Arthur [are] great musicians, I just saw them play in the Black N’ Blue Bowl where they came out and killed it. I like their songs, I like the message behind what they’re saying. Civ always has great stuff to say live on stage. They took off for a while and went to do a bunch of other stuff – the guys were in other bands – but they’ve been playing shows again and it’s just great to see them out there. They [made positivity their own] without being corny about it. Some bands I’m like, ‘Yo, that’s so fucking corny’. They get out there and preach – I won’t mention no names – but some bands get up there and it’s a fucking sermon between songs and it’s like, dude, no one really wants to hear that. Civ was just spot on with shit he was saying.”

“Ezec’s a fucking maniac [laughs]. Great band live – part of that DMS hardcore shit. Ezec is a funny motherfucker, and he goes off – the band is great and you’re not going to see a bad Skarhead show when they do play. I actually sang on one of their records; the song TCOB, back in the day; I can’t remember what record that came out on [it was Kings At Crime – NYHC Ed]. As a matter of fact, I race for a kid that has neurofibromatosis, for the Children’s Tumour Foundation, and he did an art auction of some graffiti pieces and donated a bunch of money to the charity. Again, he’s a stand up dude, and that matters a lot to me as far as what I think about a person’s band. He has a great band behind him and he’s cool – he’s like a brother to me. People know that he’s a fucking maniac and he’s beat a lot of people down, but I gotta tell you, he always gave people the opportunity, like, ‘Yo, maybe you should just walk away,’ and they didn’t, they pressed the issue, and then you’re going to get hurt, because Ezec can fight. He never just went out and fucking clobbered somebody, just being a fucking bully. He’s not a bully – Ezec would rather laugh with you all night than sit there having fights with people. He’s got a heart of gold.”

”[I like] the positivity of the band; they’ve been doing this shit a long time. I remember when Toby was the roadie for fucking Sick Of It All, and then they started playing. Toby’s like a brother to me. People say they’re pop punk or whatever the fuck but you know what? Every fucking one of you is singing along and Toby knows how to work the crowd. H20 are still doing it, they still bring it every night, Toby’s just – again, it’s the character of the person; he goes out and he works with kids, he’s a positive person and a good role model. You may not like his band if you’re into the real heavy hardcore shit, but you can’t deny their shows sell out and there’s a thousand kids screaming every one of their fucking lyrics. I’m not going to put a H20 record on, I’ll be honest, but I’ll go see ‘em live because it’s going to be entertaining.”

Bloodclot’s new album, Up In Arms, is out on 14th July via Metal Blade Records. Check out an exclusive stream of new song Manic below!

Have you seen the one-man hardcore band?