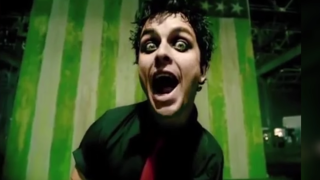 In the months leading up to the release of the title track from their 2004 album American Idiot, Green Day were in the doldrums.

The song and band’s profile was given something of a boost by music video director Sam Bayer, the man responsible for videos by Nirvana, Metallica and Marilyn Manson.

Performing in front of a corrupted US flag that bleeds green liquid all over the band themselves, the political anthem enjoyed near-constant rotation on music television channels.

Even if you’re not a fan of the band but have heard the song itself, you know how it goes and are probably humming the opening line as you read this. But the power of the trio’s anti-George Bush rhetoric loses its power when you strip the actual song from the images and add in the idle strumming of an unamplified guitar and a jokey overdub of frontman Billie Joe Armstrong miming to his own song.

The clip above is the handiwork of House Of Halo’s Erik and Eline. Here, the Dutch duo have created a shortened version of the three-minute original, minus the riffs, the drums, bass and vocals. What we’re left with is three punks splashing around in luminous green water and making odd grunting sounds.

Is it genius or simply unsettling? We’re undecided.