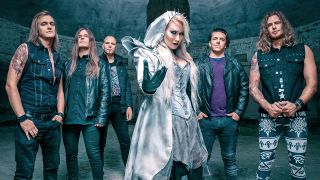 Following a sold out London show at the Tufnell Park Dome earlier this year, the heroic metallers revealed they'd be returning to UK shores for a full headline tour this month.

To celebrate the Finns' return and taking inspiration from the title of their latest release, Hammer spoke to bassplayer Eero Sipilä to ask about his favourite musician cameos in Hollywood flicks (and a few TV shows...).

"Since you're a metal magazine, I suppose this ought to be mentioned first. The seminal 90s death metal band, Cannibal Corpse, in one of the seminal 90s comedies – Ace Ventura.

"This is probably the closest death metal ever got to the mainstream. Also, somebody needs to bring Jim Carrey’s dance moves to a mosh pit."

Jim Carrey stars as the infamous "pet detective", Ace Ventura. Featuring a cheeky cameo from one of the world's most brutal bands ever, the mighty Cannibal Corpse.View Deal

"I imagine appearing in The Simpsons is probably a bucket list thing for a lot of bands – at least for me it was hard to to pick a favourite cameo!

"The entire episode is about Homerpal… I mean Lollapalooza. The epitomy of 90s music culture: 'Making teenagers depressed is like shooting fish in a barrel'."

3. Keith Richards (Pirates of the Caribbean: At World's End)

"Hats off to Keith Richards for sporting the pirate look before it was a thing!

"To be honest, I didn’t understand much of the the plot but having Keith in there was really cool!"

"The most modern cameo on the list and another of those 'clash of titans' things.

"I’m not generally a fan of B-movies but this scene cracks me up. Who knew Tom Jones had an action star in him! Makes me wish he was the lead star of the entire movie!"