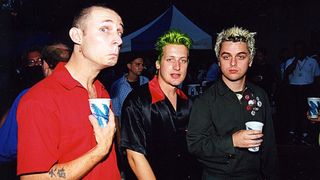 Green Day having the time of their life in 1998 (Image credit: Jeff Kravitz\/FilmMagic)

Billie Joe Armstrong once announced in an interview that his band would never “do a Neil Young”. His meaning was clear. Unlike all the toothless ex-punks and bloated superstars who littered the music business, Green Day would never surrender their distortion pedals or rework their hits on acoustic guitars for the benefit of a cross-legged audience. Whatever Armstrong, Mike Dirnt and Tre Cool had become in the aftermath of 1994’s Dookie – millionaires, celebrities, fathers – they were still punks on vinyl. Smack-in-the-face songs, power chords and bleeding ears remained the band’s calling cards, and they had no desire to change that.

Until the release of Nimrod in 1997, Armstrong was true to his word. If anything Green Day seemed to be getting harder and heavier, with hits such as Brain Stew and Geek Stink Breath (taken from 1995’s Insomniac) trading in bad-tempered guitars and morbid lyrics. So it came as a real surprise when the GD faithful reached the 17th track of the new album, only to be confronted with delicate work of acoustic picking and swooping strings.

It was another test of faith for those who’d fallen in love with the raw sound of 1991’s Kerplunk, but the sheer audacity of releasing Good Riddance (Time Of Your Life) more than compensated for its parent-friendly feel. Like John Lydon appearing on I’m A Celebrity – Get Me Out Of Here!, the song’s inclusion was ‘punk’ precisely because it was so ‘un-punk’. As Dirnt would later attest, “putting it on our record was the most punk thing we could do.”

The moshpit might have been bewildered, but those in the band’s inner circle must have suspected that a song like Good Riddance was inevitable. While their gigs were still strictly eclectic affairs, Green Day had long been aware of the benefits of working on acoustic. It was a simple case of practicalities winning out over principals. “The real irony,” revealed Dirnt, “is that for years and years, when people think of us, they think of our heavy guitars and the sounds we’ve had on our records. But we’ve written most of our songs on acoustic guitars. When we wake up in the middle of the night write a song, Billie doesn’t run to his amp and plug in his guitar. He picks up an acoustic guitar and starts jamming on it.”

Nor was Good Riddance written specifically for Nimrod. Armstrong had penned the song three years earlier during the recording of Dookie and didn’t seem bothered whether it even saw the light of day. “I didn’t really think of it as being for an album or anything,” the frontman admitted to Guitar World. “Not for the first time, Armstrong’s commercial judgement was flawed. Good Riddance would be the band’s most successful single since Basket Case, entering both the US and UK charts at Number 11 upon its release in January 1998, and giving an incalculable boost to the sales of Nimrod across the planet. Not bad for a song which first appeared in strum-along form on the German b-side to Brain Stew/Jaded.

It was around this time that Good Riddance turned from a song into an phenomenon. Where Green Day tunes had previously been either too smutty or too steeped in distortion to be shortlisted by ad agencies, now the band found their new single being played everywhere from TV shows to baseball games. Good Riddance not only soundtracked the death of a cancer patient in ER (“I heard it was going to be on,” recalled Armstrong, “but I kinda purposefully didn’t watch it”) but also appeared on a series highlights episode of Seinfeld when it ended in 1998. It was played over montages during the PGA golf tour and the World Cup that year, and turned up and more weddings, funerals and graduation ceremonies than almost anything else.

The song was everywhere. Even Glen Campbell recorded a cover version for his 2008 album, Meet Glen Campbell. Good Riddance sounded like a positive ditty, but it wasn’t. The fact that radio broadcasters routinely referred to it as Time Of Your Life – as opposed to Good Riddance (Time Of Your Life) – gave listeners the mistaken impression that Armstrong’s lyric was a cosy reflection on past glories. In fact, the song was a bitter rebuke to a former lover. “It’s about an ex-girlfriend who had moved to Ecuador,” the singer told Guitar World. “In the song, I tried to be level-headed about her leaving, even though I was completely pissed off. So I named it ‘Good Riddance’ just to express my anger.”

Armstrong’s lyrics in conjunction with Mark Kohr’s 1997 video (depicting a tattoo youth delivering parcels and a goth dolefully washing windows) lends further weight to the theory that Good Riddance is also an ode to missed opportunities and wasted lives. The concept that he was ‘saved’ by punk from a life of menial labour is a subject that Armstrong has touched upon in several interviews, it’s not hard to see this as a tribute to the ones he left behind. The record-buying public continued to scoop up copies of the single by the armful, fooled by the lilting string sections, thinking it was a song of chest-beating triumph.

While Good Riddance was the final straw for many punk purists, it also announced the beginning of Green Day’s metamorphosis from punk brats into a genuinely interesting band. While their other chart-straddling hit Basket Case had forced them into a restrictive pigeonhole, this latest smash actually broadened their horizons, suggesting through its commercial success that the public were ready to accept new directions from the band. After years of clinging to punk for dear life, Green Day were ready to cut the apron strings.

So, in 1999, the band played their first acoustic set at the Bridge School Benefit concert – a charity event that, ironically, was organised by Neil Young, who also appeared on the bill – while their Warning album of the same year continued to explore this new stripped-back direction (most notably on the acoustic-led title track). “I think Good Riddance (Time Of Your Life) has really freed us up, in a lot of respects, to be able to do different things,” said Armstrong in 2000. “To get into more sensitive content without feeling like you’re selling yourself out. Or that you’re doing something because you need a hit.”

He was right, it’s impossible to think of Green Day moving from such straight-ahead thrashes as Basket Case to the intricate and extended ‘suites’ of American Idiot without some sort of stepping stone. With the band’s puerile antics and basic music wearing increasingly thin as they neared their 30s, Good Riddance was an escape route to a more adult sound and a welcome sense of maturity. It allowed them to grow up – without growing old.