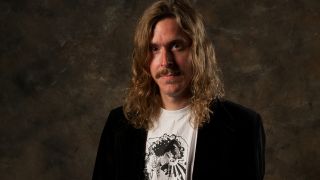 As frontman of prog-metal stalwarts Opeth for over 25 years, Mikael Akerfeldt has won himself some pretty note-worthy friends and fans in his time. As he discusses in the most recent issue of Prog Magazine, Akerfeldt transformed his band from their death metal roots to become one of the most tantalising prospects in modern prog – not to mention winners of the International Band Of The Year Award at this year’s Progressive Music Awards – and he isn’t done with the band’s evolution just yet.

We catch up with four of Mikael’s famous fans to talk music, collaborations, and find out what it’s really like to be mates with prog’s golden boy.

Mike Portnoy: “I love Mikael dearly. He and I are kindred spirits. First of all, I love the music he makes. You won’t get a bigger Opeth fan than me. I love everything they’ve done, from the most brutal music to the most prog epics. You put it together and you get ‘bru-tiful music.’ As a fan, it moves me so much.

But as a friend and as a person, we’re both music enthusiasts and historians and record collectors. We get together and we can just talk music and rock’n’roll trivia and history together – I love and respect and admire him so much.

He is the one person that I have yet to work with. We’ve toured together, and I’ve taken Opeth out when I was in Dream Theater, and he and I constantly flirt with the idea of doing something together. We’ve been talking about it for 10 or 15 years now. We’re just waiting for the right moment, for the right vehicle.

It’s the one collaboration that’s still eluded me and I’m still patiently waiting for. I would do it tomorrow – Mike knows that. I think he’s a bit more hesitant. I’m obviously very good juggling 87 bands. I think he’s a little more, ‘Can I do this? Is the time right? What will it be?’ I keep trying to nudge him: ‘Mike, dude, whatever it is it’ll be great – let’s just fucking get in a room and play together.’”

Steve Hackett: “I first became aware of Mikael through the stuff he did with Steven Wilson. It seemed quite radical, and I thought, ‘Hmm, interesting voice.’ I wasn’t really aware of his death metal background at the time, but I picked that up latterly – I suspect that’s only part of the picture with him.

Most of us concentrate all our efforts on something that can broadly be called a genre, whether that’s progressive music or death metal. But I’m interested in the way things can develop and the way you can transcend the limitation of genres, and I think he is too.

I get the feeling that Mikael considers himself more of a guitarist than a singer. The rest of us, while we note that he plays excellent guitar, there’s a uniqueness to his voice – a depth and a soul. It’s a voice that can sing death metal, but also a voice that can sing ballads and do all this other stuff. He’s a multifaceted character with tremendous capabilities.

Mikael helped out on my Genesis Revisited project, where he sang some of Supper’s Ready. But I would love to collaborate with him again in the future because I think he’s absolutely terrific. I haven’t mentioned anything to him but I think something original would be good. He’s a big fan of the classic period of Genesis, and I’m getting interested in the area he’s working on. Once you start putting focus on each other’s things, interesting things can come out of it.”

Steven Wilson: “I first came across Opeth when I was being interviewed by a French journalist in the late 90s. He gave me a copy of Still Life, saying, ‘You might like it.’ It was spectacularly powerful but really nuanced. I realised there was a real artist at work.

Mikael and I have worked together many times over the years. We’re both music nerds, but what we realised early on was that we both have no concept of musical boundaries. We egg each other on to become more and more experimental in what we do.

When Mikael says he’s a mediocre singer or guitarist, I understand what he’s saying – I say the same thing. But he’s a great musician – and that has got nothing to do with ability. Great musicians are people who are brilliant musical thinkers. Brian Eno is one – he can’t play anything, but he thinks about music in a brilliant way. Roger Waters, arguably the worst musician in Pink Floyd, is another – he’s responsible for most of their groundbreaking music. Mikael is in the same category.

I’d like see him make a record that really focuses on his songwriting, because he’s a fantastic songwriter. I’ve just made a record where I’ve stripped away a lot of the more conceptual elements and focused on my songwriting. I’d like to see him do the same, because I think he is really underrated as a melodicist, a songwriter and arranger. I think that would be a challenge for him but one he’d absolutely rise to.”

Arjen Lucassen: “The first time I heard Mikael’s stuff was on Damnation. I knew of Opeth, but I’m not a death metal guy – I’m a 60s/70s guy. But on Damnation, he was singing rather than growling. I heard his voice and I loved it.

I asked him to sing on Ayreon’s The Human Equation simply because I love his voice so much. He’s got a really melancholic feel. If a voice sings beautiful melodies, that’s it for me. It’s like David Gilmour – he’s not an amazing singer, he’s just got a warm voice. Mikael is the same.

He’s such a nice guy to be around. When he came to the studio, he was joking around all the time, playing on my old synthesiser. The guy is hilarious, and it’s because he’s real – there’s nothing fake about the guy. He’s not trying to be funny, he is funny.

We sat down one evening and we were playing music to each other – not just prog, but also stuff like 16 Horsepower and Wovenhand and Simon & Garfunkel and Whitesnake. I’ve got all these old vinyl LPs, these collectors albums. I said, ‘Take anything you want.’ He was like a kid in a candy shop. He went home with about 10 or 20 of these albums.

I’d love to work with him again. I ask him, but he’s such a busy guy. I asked him for the Ayreon Universe shows I did recently. He knew I was doing theatrical things, and he said: ‘Do I have to dance?’ ‘No, Mikael, no dancing.’ Unfortunately, he couldn’t do it. But we will work together again one day.”

Opeth’s newest album, Sorceress, is out now via Moderbolaget/Nuclear Blast. Opeth are currently on tour. You can read our Prog Magazine cover story with Mikael Akerfeldt on TeamRock+ right now.

Opeth want next album to be more “twisted”