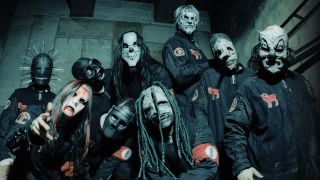 What were your early years like, as a band with so many members?

Corey Taylor (VOCALS): “The older we’ve gotten, it feels like we’re actually finding more in common with each other. When we first started, dude, you couldn’t have picked nine more different people. When we’d go out on the road, especially in that first four years – because we essentially did the first album and Iowa back-to-back and we toured the whole time – we really got to know how different we were and it drove us all nuts, these nine angry men. But we all had our own psychoses going on. It wasn’t that we weren’t friends or brothers, but we were so different, and the only thing we had in common was this fucking great experience called Slipknot, and we were too young at the time to appreciate it.”

After Paul Gray passed away, there was a lot of pressure on you to address the future of the band. How did that feel?

“The great thing about being honest with your fans, and one of the worst things, is that everything you say is gonna be picked up and retweeted and reposted ad nauseam. But at the same time, I’m not gonna bullshit people. At that moment, the furthest thing from my mind was making a new album. Firstly, it was insulting to us and insulting to Paul, but also we hadn’t even had time to process it. We didn’t feel we could get together without that missing element and that secret weapon we’d always had. You don’t realise what you have until it’s taken away.”

How did you cope with it?

“Slowly but surely, people started to calm down. But every now and then, someone would say, ‘So when are you gonna make a new album?’ and I’d be like, ‘Hey, dick face, how about I come to your house and break all your fucking windows and smash up your car, and then you tell me if you’re gonna fucking move? Get a fucking grip, you fucking people!’ So I was OK with it. I was OK with being the focus, because I knew that I could take it and it was for the right reasons.”

You’ve headlined Download multiple times. What’s the significance of the festival for you?

“That festival has always meant so much to me. I remember the first time I played it, which was actually with Stone Sour. I’ve never been so anxious and nervous for a gig in my life. Then you fast forward, and it was the night we first headlined it, and that feeling came back to me. I was so anxious to get out onstage but so nervous to be there. People call them prestige gigs, but this was more for me. This was history. I can remember sitting at a shitty lunch table in study hall at high school, reading RIP magazine or Circus, and just reading about Maiden and Guns N’ Roses and AC/DC and Mötley and Metallica and Def Leppard – all these bands playing at Donington or Monsters Of Rock. Just knowing that that was the pinnacle, that was the top of the hill for our genre. That was Olympus, sitting with Zeus, and he’s pulling lightning bolts out of his ass. It was the real deal.”

How did you feel before you got onstage that first time?

“That night in 2009, I’m literally seconds away from stepping onto that stage and I’m back at that table, reading about it, and watching Bruce Dickinson being Bruce Dickinson on the biggest stage for our music, and I’m thinking, ‘I’m about to be Bruce Dickinson! I’m about to be that dude!’ I was giddy and I was a wreck. I couldn’t stop shaking and crying. It was really hard for me to control my emotions but also my voice. If you hear it back, I’m a bundle of nerves, but it’s all good shit. The first thing I said was, ‘Welcome to a dream come true!’ and I don’t think I’ve ever been more honest with an audience in my life. So that festival has always meant so much to me, and the fact now that in the last few years, in a way, I’ve almost become weirdly synonymous with it. I never would have guessed that in a million fuckin’ years.”

The 10 best Slipknot songs that are definitely NSFW