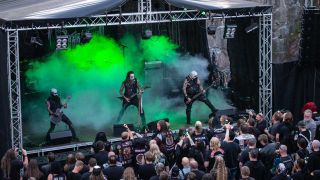 What's the perfect setting for a black metal festival? Other than the deepest darkest depths of hell, we're pretty convinced the quintessential BM venue lies within the gates of Fredriksten Festning, Norway (of course).

Situated in Halden, a border town at the southern most point of Norway and resting right on the edge of the Norwegian/Swedish border, this post-medieval fortress holds four centuries of Nordic history within its walls – a suitably spooky backdrop for the most diabolical subgenre of metal.

For five years Fredriksten was home to Norway's largest rock festival, Tons of Rock. But, upon their move to Oslo, there was an opening – nay void – left to fill, and in came Imperium.

With an impressive line-up of genre heavyweight that included Destroyer 666, Taake, and Kampfar, as well as Mork (Halden is Thomas Eriksen's hometown), Uada, Ragnarok and many others – the event's first year promised to be a delightfully devilish assault on the eyes and ears.

Understandably, we couldn't miss out on the opportunity to see true Norweigan black metal hammering off the 400 hundred year old stone walls and went to check out the first edition of the brand new festival – here's what we learned...

Black metal + historical surroundings = a match made in hell

Why did nobody think of this before? Black metal bands have always extensively used historical imagery, themes and references within their lyrics, album artwork, logos and even sonically.

Bathory, the Swedish "blueprint" for Scandinavian black metal, used Norse and Viking themes in their lyrics, later inspiring Burzum, Emperor, Einherjer, Helheim and bands on Imperium's bill such as Taake, Ragnarok and Kampfar.

This link between black metal and history is intrinsic, and to be able to enjoy the genre in such a powerful historical setting, such as a fortress, is a real treat. The buildings background of war and strife, looking down on beautiful natural fjords embraces the very same topics that many black metal bands approach within their lyrics: the ugliness of the world and the ignorance of mankind while they look down upon (and in some cases destroy) the beauty and peace that lies within nature.

The only other festival to delve into this link between BM and history has been Midgardsblot – which takes a more ancient and spiritual path, situated upon an ancient Viking burial ground.

Small and intimate > Large and impersonal

The size of Imperium is truly special. The main stage is situated a small cobbled open area surrounded by post-medieval walls and buildings. The uneven surface of the ground means you can see the band from all angles, and the size of the area allows you to get right up close.

While larger festivals certainly have their perks, being able to easily get to the front of the crowd and get almost face to face with your favourite band is something really special.

Okay, so it was the first Imperium to take place, so it will presumably (and hopefully) grow in size, but with such a unique location and niche line-up of bands, we're certain it will maintain its intimate and community-driven nature.

Black metallers bad rep is a crock full of shit

If you ever needed proof that the stereotype of black metal musicians and fans of being fascist, racist, sexist, or bigoted in any way was a load of utter nonsense, just take a look at the friendly faces of music-loving fans at Imperium.

The festival had united with Metalheads Against Bullying, a fantastic charitable organisation that work against bullying, harassment and discrimination and to help engage with those within making the metal and rock community specifically and foster more awareness concerning bullying in any shape or from.

...In fact black metal fans might just be the most inclusive and supportive

While it was great to see an organisation like Metal Against Bullying being represented and embraced at a black metal festival, it was clear to see that bullying, discrimination and prejudice just aren't an issue within the BM community.

People supporting all sorts of metal and non-metal band t-shirts disproved the idea that black metal elitism is even a thing, everyone was friendly, welcoming and inclusive – and even the mosh pit was relatively tame, with fans picking up items others had dropped and generally being courteous to one another.

No spiked drinks, no sexism and no racism – so can we drop the relentless assumptions yet? Imperium goers and organisers made it easy to join in, make new friends and not feel in any way threatened or uncomfortable, something that can't be said for a lot of fests.

Imperium can only go from strength to strength

The journey of Imperium has been incredible. The small team of festival organisers were pushed to the limit to put together the festival in a matter of months, after Tons of Rock announced its move to Oslo earlier this year.

Considering the exceptional support from the likes of Cult Never Dies and other vendors as well as, of course, premier bands within black metal, it's hard not to believe that this small town festival won't go on to make a significant impact on the scene within Norway, and globally.

It truly is a destination festival, and we're excited to see what they've got up their sleeves for next year...