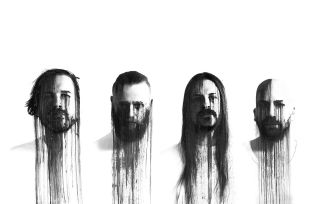 Vikings: adventurous lot. Didn’t just stick to the same destinations, they roamed many seas, interacted with a host of cultures (not always to their immediate advantage, admittedly), probably thought of home and got a bit wistful as they were navigating the expanse.

Like fellow Bergen natives Enslaved, Helheim have long redefined Viking metal as a multi-faceted, dynamic and open-ended experience, its moods as ever-changing yet true as the seasons. The band’s forthcoming album, Rignir (Norse for ‘rain) - unmoored from the Dark Essence port on April 26 - offers yet more strings to their sonic bow, suffused in a range of immersive and hallowed atmospheres, borne on plaintive clean vocals as well as their characteristic blackened lunges and generally taking you on a tour of breathtaking lands that lie beyond the traditional Viking metal boundaries.

Helium are about to embark on a tour with fellow restless and horizon-widening souls, Vulture Industries and Madder Mortem - with a UK show at the Underworld, London on May 1 - and to celebrate their imminent arrival, we have an exclusive stream of Rignir in its full, sensory splendour.

“This time around,” explain the band,” we have been very inspired by the local weather of Bergen. The autumn and winter seasons can summon the darkest of feelings within oneself, and this backdrop served as the fertiliser that would germinate the seeds of our lyrical ideas. Exploring the darkness of nature as something that can be seen, as well as sensed, it became a canvas where the pen drew words that rose from the depths of solemnity and alienation. Although each track depicts an ever-growing intensity of suffering and loss, there’s still a dialogue on how to maintain some sort of sanity or inner peace.”

Stand at the prow of your nearest longboat, ponder the elements and their bearing on your general sense of being, shed a tear for the poor sods you’re about to ruthlessly pillage and rise above the melée with a new sense of purpose to Rignir below!

And check out the tour dates below!