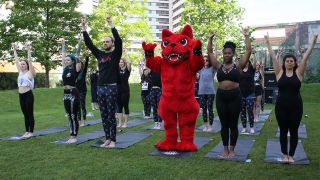 Doom. Metal. Yoga. When Tony Iommi first laid down the towering opening riff of Black Sabbath – the self-titled track from the self-titled album that not only brought us one of the greatest bands of all time, but formed the cornerstone of heavy metal itself – you can’t imagine that he’d have ever expected it was leading to this.

Hammer is stood at the very front of a group of over 20, black-clad, fellow metalheads, donning a pair of custom yoga pants that can best be described as snug, bending ourselves into the kind of shapes that we’ve previously only seen in a pack of pretzels while cascading walls of booming, downtuned riffs blare across the sunny park we’ve amassed at just outside King’s Cross. This, friends, is DO.OMYoga. And it’s unlike any exercise class you’ve ever taken before.

“Looking back, I can see the birth of DO.OMYoga actually took place while I was travelling in India,” explains instructor and DO.OMYoga co-founder Kamellia Mckayed earlier that day. “After three months of travelling, I was terribly sick and skeletal. I’d made it to the foot of the Himalayas, to Rishikesh – the ‘Las Vegas of Yoga’, but I was too sick to practice. Then, my ear suddenly tuned into a familiar sound – an American guy staying opposite me was playing the Om album, Advaitic Songs. I practiced that day in my room to the album, and continued every day for a month when I got back to London. Eventually, my friend Sanna – who helps run DO.OMYoga with me – approached me and suggested it would be cool to practice yoga to doom metal. I said, ‘I already have been – and it works!’ The rest is history.”

Perhaps, all things considered, doom shouldn’t be such a surprising fit for yoga. Metal’s oldest subgenre has rarely strayed too far away from the lumbering, weighted riffs that Iommi perfected nearly half a century ago, but over more recent years, the scene has become inundated with bands pushing the sound into more nebulous and transcendental realms. Bands like aforementioned Californians Om, Oregon collective Yob and droning force of nature Sunn O))): all artists that bring a deeper, spiritual gravitas to a style of music that is by its very design made to entrance your mind as much as your body.

“I grew up listening to metal as a teenager,” explains Kamellia. “I have been running DO.OMYoga for two years now, and I love creating new playlists for each weekly practice, and doom underpins a lot of them. I also use a lot of ambient, drone, psychedelic and avant-garde stuff, too and of course there’s chanting and mantra, traditional or otherwise. If the vibration is right, it all comes under DO.OM. Always dark, always atmospheric and always emotive. It works beautifully together!”

Alright, so two worlds collide and it actually works, but how does that fit into a lanky, useless music journalist attempting his very first session in front of nearly two dozen regulars who know their Downward-facing Dog from their Balasana?

“You’ll be fine,” Kamellia smirks as she puts on a headset and the small park we’ve taken over is suddenly awash with droning noise, my fellow yoga students taking up starting positions. Oh, god. Here we go…

There’s more advanced ones too, of course – the Salamba Sarvangasana, essentially a supported shoulder stand, had Hammer very nearly toppling over – and there were a couple of times where a helpful hand from Kamellia shot out to push a head into place or nudge a foot into a better position. And, truth be told, it’s hard to get your Zen on when you’re forced to sneak a peak at other students to make sure you're doing the right pose or transitioning into the next one correctly, but the longer the session goes on, the more easily you find yourself clicking with – RRRRRRIIIIIIIIIFFFFFFFFFF – the rest of the class.

And as for those big ol’ RRRRRRIIIIIIIIIFFFFFFFFFFs? Turns out huge, cascading walls of metal really do provide a pretty handy soundtrack to finding your chakra. In what seems like half the time, 40 minutes spin by in a blur of of bending, creaking and sonic thunder, underpinned by our instructor’s careful guidance through the motions. It’s at times confusing, often exhilarating and occasionally a little painful, but it’s actually great fun, and you really do feel like you’ve had a good workout come the end.

“That went really well!” beams Kamellia. “We normally run sessions by candlelight, so they are very dark, meditative and connecting. It was actually the first time I’ve done it outside and on grass, but it still worked!”

DO.OMYoga will be holding classes across the weekend at Download Festival from June 8-10.

For info on their weekly classes, head to DOOMYoga's official website.