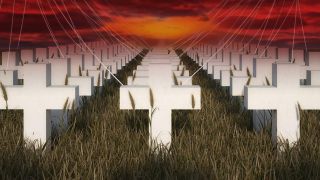 Metallica’s 1986 masterpiece Master Of Puppets is one of the single most influential albums that metal has produced. It’s no shock that a record with such legendary status would have musicians queuing up to try and put their own spin on its eight classic songs. We’ve separated the wheat from the chaff and come up with the ultimate Master Of Puppets covers album

Possibly the closest we’ve ever had to a contemporary version of Master Of Puppets was Machine Head’s staggering The Blackening from 2006, so it makes perfect sense to have them open up here. Robb Flynn and Co. don't fuck with the formula at all, but do give this thrashing tsunami a dose of modern production and a dollop of testosterone fueled aggression. Even angrier than the original.

Trivium have never been shy about their love of Metallica, and were hotly tipped to be their successors around the time they released this cover. It’s a pretty bold move from, essentially, a bunch kids to cover one of the most beloved metal songs in history, which shows the kind of zero fucks confidence Trivium were full of in the mid-00's. That they do it this well is testament to their skills.

Primus – The Thing That Should Not Be

Taken from 1998’s Rhinoplasty collection, which features covers of the likes of Peter Gabriel and The Police, Californian funk loons Primus would hardly seem to be the most obvious band to take on Metallica’s brooding, doom-laden epic. But Les Claypool’s rubbery yet tar thick bass and deranged vocal delivery work oddly well.

Metallica at their most stirring and epic, you’d think Sanitarium would be far more suited to the likes of the cello version delivered by Apocalyptica, or the more straight ahead take Bullet For My Valentine went for. But, just for the sheer conceptual madness of it, we’ve plumped for Limp Bizkit’s live version of the song, as seen on the MTV show Icon: Metallica in 2003. Watching Fred Durst strip the song of all nuance and just try and get people bouncing to a song about abuse in an insane asylum is certainly bizarre, but they somehow manage to make a nu-metal banger out of it. Go figure.

One of the heaviest songs on the album, which makes it the perfect song to be given the Chimaira treatment. Around this time the band were promoting their self-titled third album, and had been getting more and more extreme in the process. Here they play it pretty straight musically but vocalist Mark Hunter gives a throat ripping performance that steals the show.

In 2004 prog-metal kings Dream Theater released an official bootleg of themselves covering Master Of Puppets in full, it’s all worth a listen, but one of the best moments is their version of Leper Messiah. Probably because the song, with it’s weird time signatures and twisting, technically bewildering metal, is exactly the kind of music that DT would go on make a career out of writing themselves.

Although Mastodon remained the most faithful, and DJ Shadow took the song the furthest away from its original form, we’ve decided that the definitive cover of this instrumental masterpiece comes from the second album by this Mexican acoustic duo. Mainly because, with just two acoustic guitars playing the song, no one has to compete with Cliff Burton’s staggering performance on the original. But there is more to it than that, the pair bring a genuinely different and unique flavour to the song, maybe more so than anyone else on this list.

Although Flotsam And Jetsam, Tankard and Funeral For A Friend all gave it a go, and Dream Theater roped in Napalm Death’s Barney Greenway to beef their version up, cult Floridan metallic-hardcore band Shai Hulud get the nod here. Taken from the re-issue of their A Profound Hatred Of Man EP, alongside covers of Bad Brains, NOFX and Bad Religion, this might be the single most extreme cover of a Metallica song ever. Turning it from thrash metal nirvana to careering punk clatter.