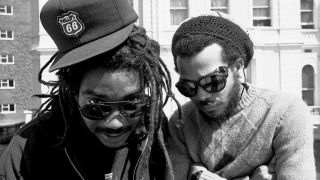 First off, I think Bad Brains are probably the most influential, yet underrated, guitar band of all time. They're a huge part of the US punk and hardcore scene, even though I never really saw them as part of that. Maybe because I became aware of them through their album Quickness and, to my mind, they were just a metal band – with a dash of reggae thrown in for good measure.

The structure and tautness of the riffs on the album weren't, for me, a far cry from the thrash bands I was listing to at the time. HR's vocals – well that was something different, but that's also present in thrash, death metal and screamo. In truth, Bad Brains are like the archetypal 'Punky Reggae Party' that Bob Marley talked about – both in the flesh as a live act and through your speakers.

In terms of my band, Sabatta, I always loved Dr Know’s guitars and have been influenced by them in the same way I was influenced by Jeff Hanneman and Kerry King's – that jagged, off the wall, wild and wailing approach in solos while laying down the sickest riffs.

Anyway, I digress – let's get to the songs! I must say, this was actually really, really difficult – Bad Brains have a bunch of tunes – so, for those I didn’t choose, honourable mentions have to go to: Sacred Love, House Of Suffering, Yout Juice and Secret 77. To be honest, I could go on and on and on...

I just find this so much fun on a few levels. Not least that the verse is totally an ode to Anarchy In The UK. The track is an early recording of Bad Brains, taken from the Black Dots compilation album, and is one of their early super-DIY recordings.

I love everything about this tune from the hummed intro to the crazy guitar solos. I really like the sound they created on this album too. Honestly, after hearing this I always dreamt of being produced by Ron Saint Germain!

I don’t know, but I guess this might be a take on eugenics. What I do know is this song is trippy as hell! Very vibey, and I love how it goes all dubby in the bridge. Brilliant.

With The Quickness has so much bounce. Like the rest of the tracks on this album, there's a real clarity and punch to it. It’s very, very aggressive but somehow contained at the same time – harnessed so it’s a very lethal but focused beast. The bounce actually kinda reminds me of Metallica’s Shortest Straw.

This is real roots reggae, reminiscent of Steel Pulse. The thing with this tune is that it actually showcases the range of HR’s vocals. He’s generally screaming on a lot of Bad Brains records. While he does that here too, he also uses it in a more melodic way. I love this tune. The group are dedicated to the Rastafarian religion and the lyrics on this one are proper Rasta, as with the thematic leanings of many of their songs. Another one to check for on that level is I And I Survive. You can put the two songs together as siblings, sonically, and they reside on the same album, Rock For Light.

For some reason, a lot of American bands who attempt reggae just don’t get it right. I think because of the influx of Caribbean people into the UK since the 1960s, the authenticity of the music over here was a natural progression. In the US, with Caribbean people coming into the black population as a whole much later than their American cousins, I think the accents, the grooves – while just as appreciated – didn’t necessarily translate as well. Bad Brains are the exception. The Prophet’s Eye is a great example of that.

I’ve only heard this as a live recording and it’s really fantastic. It’s from a live album of the same name, and it’s drawn out of a rootsy dub-inspired place.

Taken from I Against I, this is maybe my favourite Bad Brains tune. It’s really uplifting to me. It’s very percussive and syncopated. I love the way HR sings RE - IG - NITION - in this almost laid back staccato – like the verse is full of swagger but actually very understated – before breaking into more ‘classic’ Bad Brains. As usual, there’s that nice trippy bridge. There’s a lot of flanger (or phaser) on the guitar, which they use to great effect. That’s not always easy. I love this track.

I don’t know why but this tune makes me kind of sad – or, more melancholic. It’s like a sadness that you can embrace through the artistic poignancy of the track. It’s heavy. I don’t know, it's just a feeling I get from this song.

Now this is super punk! It’s just so raw, ragged and really amazing. It actually reminds me of playing a gig at The Bird’s Nest in Deptford, or the Windmill in Brixton. Total Mayhem. The answer to the question? Well, it’s bottomless!

Sabatta's debut album, Misfit Music, is available now via Blackfriars Entertainment – you can listen to it in full now. Check out video for new single Stream Of Consciousness below: