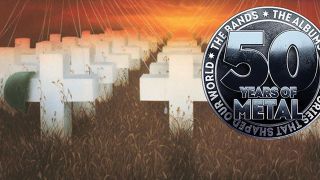 We asked 50 of today’s greatest metal stars to pick their favourite metal albums of the last 50 years. Trivium frontman Matt Heafy picked Metallica’s game-changing Master Of Puppets – inarguably one of the greatest albums ever made. Here, Matt just how Metallica’s most famous album changed his life – and altered the course of metal forever…

Metallica’s Master Of Puppets was not only ahead of its time; but it was a foreshadowing of things to come in metal – thanks to Metallica forging the blueprint.

It had all the elements of what Metallica had shown across their earlier albums, yet it was also an indication of where they could and would go in the future. It utilised fast and slow speeds, complex parts and simple musical passages, melodic hooks in music and vocals, but also intense hooks – where it’s not formally a chorus so much as a great shouted tagline.

You can hum any riff off the album. That is a testament to the power of the songwriting. While other bands existed in this musical space to a degree, Metallica had unforgettable, perfectly crafted songs within metal.

Master is absolutely an album you can hand someone who has never heard Metal before, and say, ‘This is what Metal sounds like.’ In terms of being a metal record, everything is perfect. Instruments, vocals, recording quality – it has an influence that is still prevalent to this day. It is a timeless work.

I was in my childhood bedroom when I first heard it, and its influence was obviously life-changing on me. Metallica showed me what metal is, and how it can and should be done. Hearing Metallica for the first time inspired me to really work at the craft of singing and playing guitar; it inspired me to get good at the instrument and try out for a metal band.

Songs like Master Of Puppets itself and Welcome Home (Sanitarium) are polar-opposites from each other stylistically that exist in perfect harmony with each other on the same album. Those two songs are certainly the blueprints upon which most Metal bands have made their versions of those songs upon. From rhythm guitar, to bass, to leads, to clean guitars, to vocals and drums – you can trace everyone contemporary back to this groundbreaking record.

Metallica first caught wind of who Trivium were from hearing our version of Master Of Puppets. Lars mentioned in print that he felt the cover was good.

We were able to meet them while doing some festival shows with them and will bump into them every once in a while. The members of Metallica are some of the friendliest and accommodating band members we’ve ever met. And they’re example of what hard work is in music. From before my time in Trivium, to joining, and still to this day – Metallica are the pinnacle and the example as to how a legacy is born and maintained.”