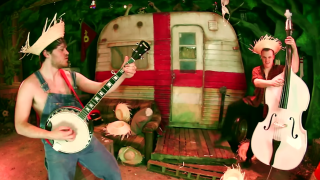 Every week, YouTuber Rob Scanlon finds new ways to mess with the minds of anyone with a passing interest in rock or metal.

Over the last few months, he’s played Nikolai Rimsky-Korsakov’s Flight Of The Bumblebee using only open strings, covered Rage Against The Machine on a shovel and made djent sound funky.

Now, as part of his May-tallica month, Rob will cover Metallica in a variety of ways for the next four weeks. To kick things off, he’s dragged their classic 1986 track Master Of Puppets kicking and screaming into the world of the banjo – the guitar for people who like to chew straw.

While the sound of this instrument being plucked will often conure up images of that scene from 1972 camping drama Deliverance, Scallon’s lightnin’ pickin’ – ably assisted by his mates on double bass and, um, keytar – makes the ‘Tallica title track sound as though it was birthed on a muggy porch step in the Deep South, rather than a cramped garage in California.

All together now, “Master of puppets, I’m plucking your strings…”

Metallica are on the cover of the latest Metal Hammer. It’s a banjo-free zone.