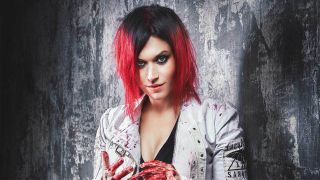 For over twenty years, Cristina Scabbia has fronted Lacuna Coil, the biggest metal band to come out of Italy. They’re one of the most notable names in symphonic metal thanks to their willingness to push boundaries with their music; 2016’s Delirium, focused on mental health with the band even visiting old sanatoriums for inspiration.

Despite being a shy performer at first, Cristina tells us she’s always had a deep feeling of self-belief, instilled in her by her family.

What was the local scene like when you first got out gigging?

“Professionally, I started because I was a guest singer for a friend of mine who was a pretty big DJ in Italy. They’d use my voice, but I didn’t want them to use my image or anything related to me. I’d like to think my real start in music professionally was with Lacuna Coil. The beginning was fine for us, I never felt unaccepted because I was a woman or because our music wasn’t the mainstream back then.”

When you were first signed, was there ever any pressure from the label for you to look or dress a certain way?

You’ve spoken before about showing the ‘real’ you on social media, not just the perfect moments. Why do you think that’s important?

“I think it is important. I’ve been showing my real self for quite a while now, I regularly post pictures with no makeup or filters. I like to give this type of message because I know I have that responsibility to our fans, especially the young people, that aren’t that confident yet. Even when someone’s super beautiful or rich, that doesn’t mean they’re happy. I feel really happy when I get messages saying ‘thank you so much, I was feeling insecure in myself and now I know I can be pretty too’.”

Do you feel there’s more pressure on women in the public eye over their appearance?

“That’s true, but it also depends on the experiences you have in life; I’ve been very lucky to have a strong family raise me in a certain direction with certain morals. I was shy to be on stage to perform, but that didn’t mean I didn’t believe in myself, I just didn’t want to be on display for that. I’ve never been afraid of showing my real self or obsessed to the point that I can’t go out wearing makeup. I know who I am and what I stand for and I know I’m not going to change.”

You’re also always keen to move your music on and not always do the same thing. Despite this have you ever felt you’ve been unfairly pigeonholed as ‘female-fronted metal’?

“I don’t even think about that! We just do what we do without even thinking we have a female in the band. I feel like one of the guys. I know it’s easy to say ‘a female-fronted band’ because you have to put everything in categories, but I never thought that way, I never felt any type of pressure and I don’t believe the guys did either.”

What do you think of initiatives to get more women into music – will that help redress the balance of festival line ups etc?

“In metal now, things are really different. When I started there were very few bands with a female in the line-up, whether she was a singer or a musician. Now things have changed a lot and I see a lot of bands with a female coming on board. I think the only problem is that metal is still a male-dominated scene, so there are more bands with guys in the line-up. I don’t think it’s a sexist thing of saying ‘we don’t want women on the bill’, I think it’s simply because there’s more bands with guys in.”